A Glass of Wine?

Yes please!
But what glass? That is, sometimes, the tricky question. I will beforehand apologize for the nerd factor of this post... 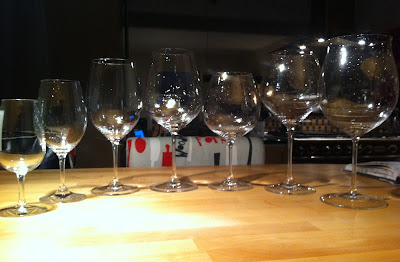 "7 glasses with the same wine just to see what glass is the best??" My better half just shaked her head and went on to do something wortwhiled. 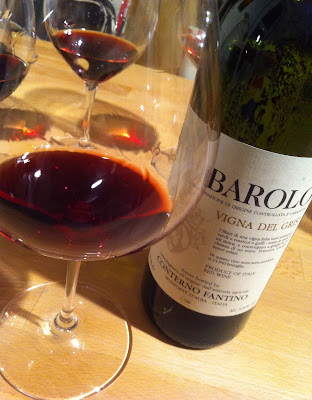 And on to the glasses. With one exeption, all glasses comes from Riedel (http://www.riedel.com/). I´m a firm believer in their glasses. I have tried all sorts of glasses from Schott Zwiesel, Bottega del Vino and Spiegelau, but for me the Riedel series have worked best through the years.
Presenting from left to right:
1) The standard ISO glass
2) Riedel Ouverture Redwine (6408/00)
3) Riedel Vinum Bordeaux (6416/0)
4) Riedel Vinum Extreme Cabernet (4444/0)
5) Riedel Vinum Burgundy (6416/07)
6) Riedel Vinum Extreme Pinot Noir (4444/07)
7) Riedel Sommeliers Burgundy Grand Cru (4400/16)

I decanted the wine two hours before this test. I poured the same amount in every glass. I then took a note immediately upon pouring and then 30 minutes later.
This is how it went.

2004 Barolo Vigna del Gris, Conterno Fantino - in the ISO glass
A light, cool nose with notes of red cherries, new leather, forest floor and a touch of licorice. Rather withdrawn and a touch angular, but nice enough.
The taste is young, fresh and tight with young, nice tannins and a long finish that ends on the dry side. Still rather closed. Didn´t change much between the two times. Good in a fairly mediocre way, but not inspiring.
82p   (tasted 2012/02)

2004 Barolo Vigna del Gris, Conterno Fantino - in Riedel Ouverture Redwine
A deeper, rounder, more elegant nose with more sweetness and a really nice mushroom/undergrowth note. The licorice is also here, but in a sweeter form. Much better on the nose. Much deeper.
The taste is almost as tight in this glass, but the fruit is darker and sweeter, and the finish isn´t as dry as in the ISO glass. And definitely longer. Very good. But still very young.
88p   (tasted 2012/02)

2004 Barolo Vigna del Gris, Conterno Fantino - in Riedel Vinum Bordeaux
All of a sudden the nose becomes more airy, hard to get a grip on. There is some dark fruit, the licorice is there, a touch of chocolate, but the overall impression is of a wine with a fleeting character.
The taste is very tight with almost hard tannins. The fruit takes the backseat but poppes up in the finish. A long finish. But the tannins really comes out in this glass. But it is deeper than the ISO glass.
85p   (tasted 2012/02)

2004 Barolo Vigna del Gris, Conterno Fantino - in Riedel Vinum Extreme Cabernet
The same airy nose as in the previous glass, its almost identical, maybe a little sweeter, but the same fleeting character.
The taste is also the same - the tannins in the foreground and the fruit in the background. But you can feel that it is a promising wine.
85p   (tasted 2012/02)

2004 Barolo Vigna del Gris, Conterno Fantino - in Riedel Vinum Burgundy
This is a whole other ball game! Rounder, deeper, sweeter with lovely red fruit - cherries and rasberries, and notes of licorice, forest floor, dark chocolate and a beautiful smoky note. Much better in this glass. The sweetness of the fruit really comes out.
The taste is also very different and much better - the tannins acts like a support to the fruit in this glass, not a center player on its own. Feels very young here too, but the structure is so much better. Really enjoyable to drink from this glass.
91p   (tasted 2012/02)

2004 Barolo Vigna del Gris, Conterno Fantino - in Riedel Sommeliers Burgundy Grand Cru
Well, how did this big boy fared then? The fish tank in the glass world - you can fill it with 1050 ccm/37 oz of wine... "I only have one glass of wine each day..."
The nose is big and deep, but the size makes it a little fleeting. Previous experience with this glass demands a heady aroma for it to really do its work, but then it is great. The fruit is sweet and fine though.
But it is in the taste that this glass triumphs. The wine hits all the best parts of the tongue and the sweetness of the fruit really comes forward. Long and very fine. But the nose isn´t up to that of the Vinum glasses.
90p   (tasted 2012/02) 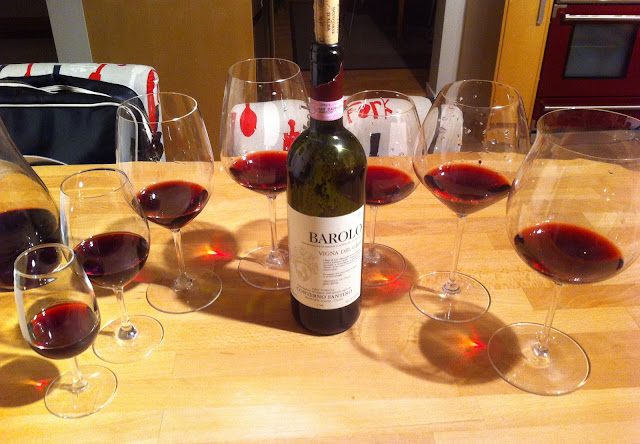 To sum up - the Pinot Noir types of glasses were the ones to go to for this wine. The Riedel generic red wine glass was really good. The Bordeaux glasses didn´t bring any enjoyment, and should be avoided. And the ISO glass? In my view - not for drinking wine anyway...

Hard work to do this for every wine...  With your average Cabernet, Pinot, Syrah - just go with their destined glass, and it will work fine. But for Barolo, I have over the years experimented with different glass, and sometimes the Bordeaux glasses have been the best, but most times I have prefered the Burgundy glasses. I have to make some more studies on the subject, what to open next...?
Posted by Joakim at 08:20