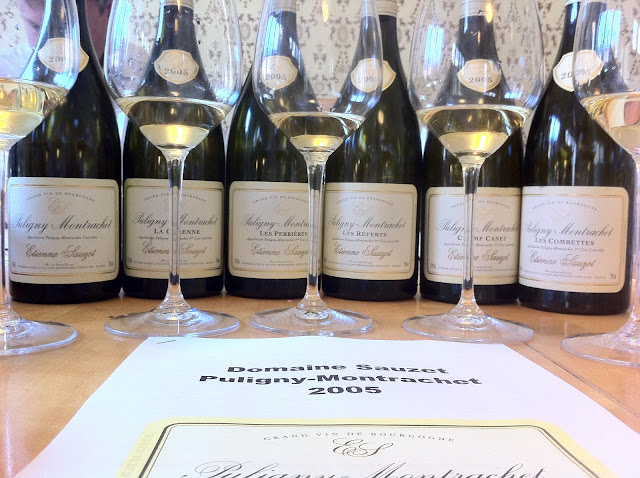 When S invites you to a special tasting, you know there is going too be some good wines poured. And this time was no execption. Six bottles of 2005 Etienne Sauzet, all from Puligny-Montrachet. It was an interesting lesson in the different premier cu sites of Puligny and of Sauzet´s skills.
All wines tasted double blind.

2005 Puligny-Montrachet, Etienne Sauzet
The village wine starts of the tasting with a cool, spicy nose with nots of white currants, lemon peel, dry tangerines and some undergrowth. A touch of matchbox comes with air. Nice.
The taste is pure, fresh and rather elegant with a fine spicy feeling and notes of lemon cream, tangerines and some smoke. A medium long, nice finish with good acidity. A very nice wine which I would be happy to drink all days of the week, but...I would´n be equally happy paying 30 Euro per bottle. I think the name Sauzet is part of the prizing?
87p   (tasted 2012/06)

2005 Puligny-Montrachet La Garenne, Etienne Sauzet
A deep, round, fine nose with lots of creamy yellow fruit, and notes of summer flowers, vanilla ice cream, sea shells sauteed in butter and a touch of band aid/rubber. A very interesting, intense nose but a touch out of focus.
The taste is more liniar and focused with notes of tangerines, lemon cream, chalk and some nutty aromas. Very long and fresh. A fine acidity. When it becomes warmer in the glass there is heaps of sweet minerals. Very, very good.
91p   (tasted 2012/06) 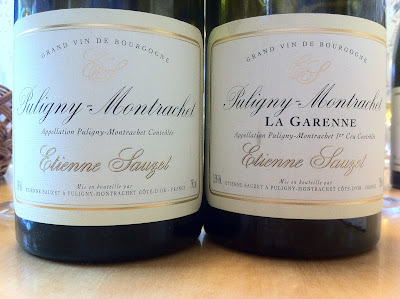 2005 Puligny-Montrachet Les Perrières, Etienne Sauzet
This beauty has a intoxicating nose that is all about refinement and elegance. There is notes of orange blossom water, dry honey, red apples, lime peel, fresh grass and some linoleum in the background. Cool and sooo fine. With warmth a lovely note of christmas spices emerge.
The taste is young, pure and very fresh with notes of summer flowers, matchbox, wet stone, dry honey and lots and lots of sweet minerals. The finish goes on for nearly a minute. A gorgeous wine.
93p   (tasted 2012/06) 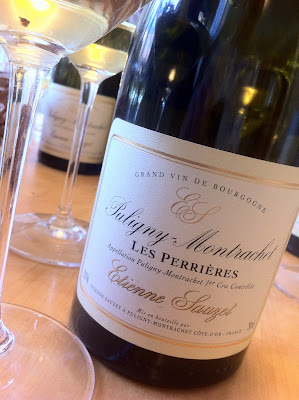 2005 Puligny-Montrachet Les Referts, Etienne Sauzet
Too bad - the premox ghost have yet again reared its ugly head... There is good fruit here and there and a nice structure, like the rest of the wines, but the whole experience is marred by a coating of oxidative notes.
Some of it actually blew of and it was better after two hours than initially, but the notes of wrinkled old apples and moist cellars never really disappeared. Drinkable with the food. Some said it tasted like an old champagne, but I think that those oxidative notes that comes with age are a completely different thing.
70p   (tasted 2012/06)

2005 Puligny-Montrachet Champs Canet, Etienne Sauzet
Aaaah - what a wine! The nose is profound in its complexity, intensity and hedonism. The nose oozes from the glass with notes of white and red currants, fudge ice cream, candied lemon peels, mint and christmas spices. Absolutely wonderful. A touch of Dijon mustard after a while! Deep and intoxicating.
The taste fresh, tight and yet creamy  with a lovely purity and sweetness. Notes of lemon cream, tangerines, yellow apples, smoke and a touch of blood grape flows over the palate. The finish is long, intense and complex. This is a stunning bottle of young white Burgundy!
96p   (tasted 2012/06) 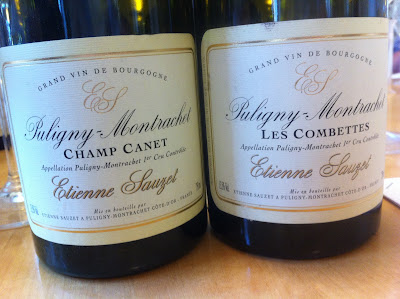 2005 Puligny-Montrachet Les Combettes, Etienne Sauzet
Last but definitely not least! The nose is very seductive, balanced and fresh with lovely notes of tangerines, summer flowers, vanilla fudge, expensive soap, wet stones and a hint oak smoke. There is some oak on the nose on this one. Very, very deep. Big potential on this one.
The taste is pure, tight and structured with lots of fresh, young acidity. This ones feels as the most backward in the line up. Notes of lime, star fruits, lemon cream, minerals and smoke. The finish is very long and ends dry and a tad compressed. Still very young. But there is stuffing here for something great in due course.
93p   (tasted 2012/06) 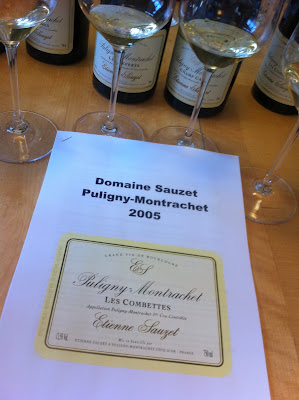 What to make of this interesting line up then? Well, Sauzet really made some fine wines in 2005. Would love to taste the remaining Puligny-Montrachet´s, and of course the Grand Cru´s as well - one can´t more than hope...:-)
They are still young of course, only the village wine is ready for prime drinking. The rest could use at least 5+ years in the cellar.
The tangerine note kept creeping up in almost all wines, I should have that in mind next time a Sauzet turns up.
All in all, a great tasting - thanks S! 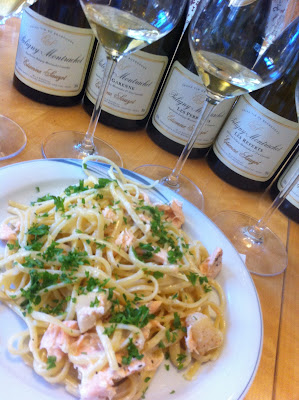 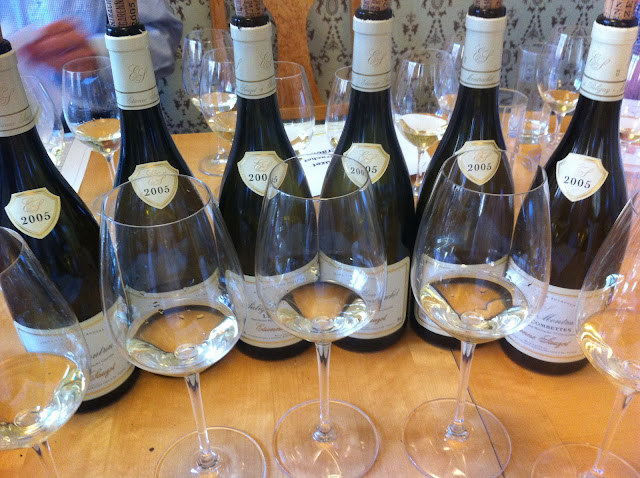