I opened another Barbaresco from this, for me, new producer a while back, the 2004 Vigna Rongallo, which is their prestige bottling.
I liked it very much so I though I would open one of their other Barbaresco´s. They make in all three different vineyard designated bottlings. More info here.

The Montersino vineyard is situated in Tresio and was planted in 1970. The wine is macerated on the skins for 10-15 days and are then racked into small barrels (20% new) for 12-15 months.

2001 Barbaresco Vigna Montersino, Orlando Abrigo
This Nebbiolo from one of my favourite modern vintages shows of an open, somewhat mature nose with notes of mulberries, rose petals, hard cherry candy, pipe tobacco and lots of mushroom forest  aromas. A very fine Nebbiolo feeling about this one. Some mature notes. Very, very good.
The taste feels younger than the nose leads you to believe, with fine notes of cool red cherries, tobacco, autumn leaves, rosehips and a touch of iron. Still some firm tannins, that reveals themselves in the long, taut finish. Needs another 3+ years. A fine wine in the making.
91p   (tasted 2015/11) 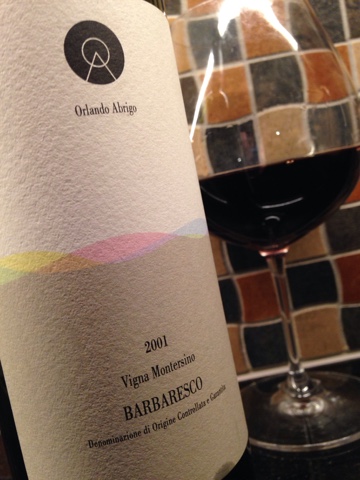