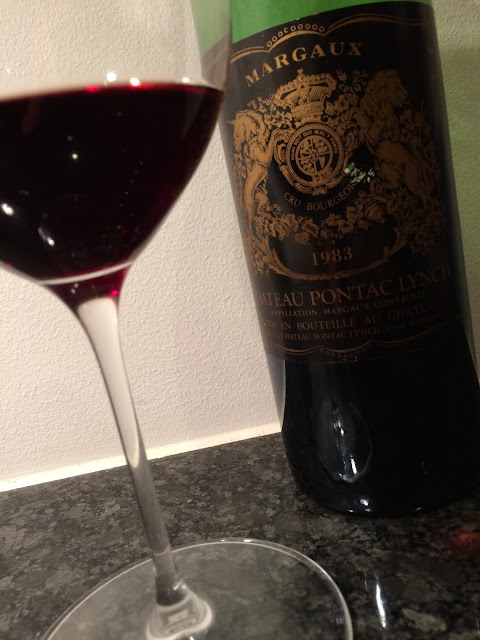 The recently tasted 1990 Lanessan got me craving more mature Bordeaux. Lets see how this 34 year old Margaux performs with a simple dish of steak and potatoes.

1983 Château Pontac Lynch
A Cru Bourgeois since 1932, this 10 ha apparently sold for higher prices in the middle of the eighteenth century than those of its neighbours, which are Château Palmer, Rauzan Segla, d´Issan and Margaux...
Equal parts Merlot and Cabernet Sauvignon with small parts of Cabernet Franc and Petit Verdot make up the blend.
The nose offers up a medium deep, round and inviting aroma filled with dried red and black currants, plums, stables, autumn leaves and a hint of pipe tobacco. Very, very good. A very fine dried up sweetness. Fully mature, but still vital.
The taste is cool, mature and dry with notes of cranberries, dried plums, earth and at the end, some dried strawberries. Medium bodied with fully melted tannins, it is a tad soft at the end but it went really well with the steak.
87p   (tasted 2017/11)