A Barbeque With Some Decent Wines... 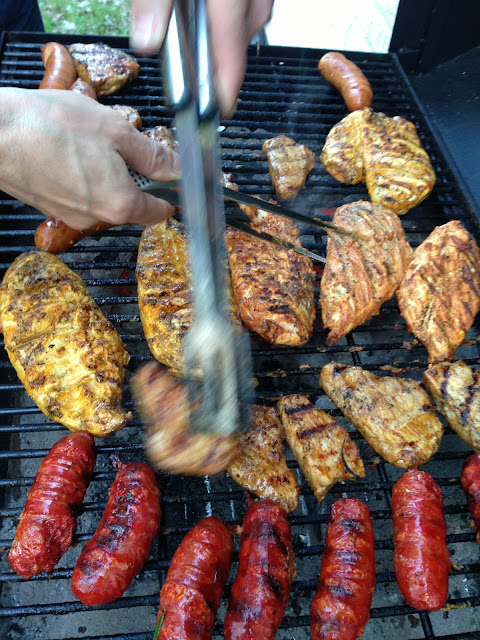 When M & J invites you to dinner you know you will drink great wines, and this night was no exception. Thanks!

All wines served blind, except for the Port at the end. There was some hints beforehand of a Brunello theme, but knowing M I always keep an open mind when the wines are poured...:-)

2008 Lower Rim Chardonnay, Stonestreet
This beaty opens a bit shy with notes of crisp pears, cold butter and some crushed rocks. But when it gets some air and warmth it unfolds like a peacock tail with notes of summer flowers, fudge, melon and cap gun smoke. Very intense and fine.
The taste is big, ripe, and yet elegant with buttery fruit and a lovely refreshing acidity. In the long finish there are notes of lemon cream, butter ccokies and ripe melon. Mouthfilling in the best sense of the word. As good as some eight months ago.
94p   (tasted 2013/05) 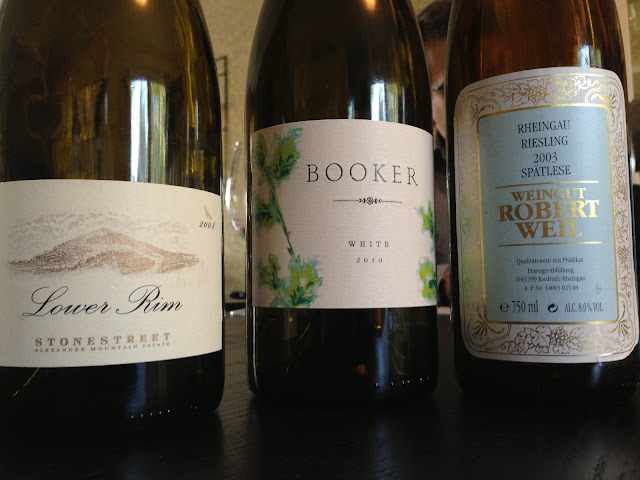 2010 Booker White
This should, according to M, have been a treat, but there was something wrong with this bottle. The wine was cloudy and the fruit was compressed and weird.
No rating   (tasted 2013/05)

2003 Riesling Spätlese, Robert Weil
This perennial favourite was not as great as it can be, but there was no complaining at the table over its elegant nose with notes of white currants, lemon peel, spices and a touch of rubber.
The taste is tight, concentrated and very long with notes of peach, crushed slate, lemon peel and warm grass. Again, really fine, but this bottle wasn´t as ethereal as it has been in the past.
92p   (tasted 2013/05)

2002 Oberhäuser Brücke Riesling Spätlese, Dönnhoff
Can there be such a thing as too beautiful, too perfect, too pure? Well, maybe this bottle. Every tiny molecule is in the right place, it oozes elegance, purity and structure. And yet, I find it lacking somewhat in personality. Don´t get me wrong, this is some really classy Riesling in the glass, but there is just something about it.
Both the nose and taste is pure, a tad restrained with lots of wet rocks, white flowers, white currants, minerals, minerals and minerals. A gorgeous wine, maybe a bit much so...
92p   (tasted 2013/05) 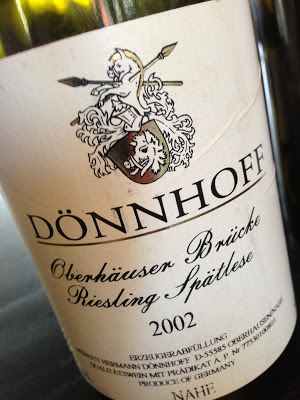 1997 Brunello di Montalcino Vigna di Pianrosso, Ciacci Piccolomini d´Aragona
A deep, fine, mature nose with mulberries, cherry jam, pipe tobacco and some moist undergrowth. A very fine maturity. Lovely sweet fruit. With air there are a fine note of black tea.
The taste is deep, tight and intense with notes of red and black cherries, violet, gravel and some dusty cocoa notes. The finish is long, warm and caressing. As with previous tasted vintages, the Pianrosso is a fine bottle of Brunello.
92p   (tasted 2013/05)

2006 Brunello di Montalcino La Cerbaiola, Salvioni
I can just refer to my previous note on this stunning wine. On this night it was a bit more shut down, but still expressed (future) greatness.
94p   (tasted 2013/05) 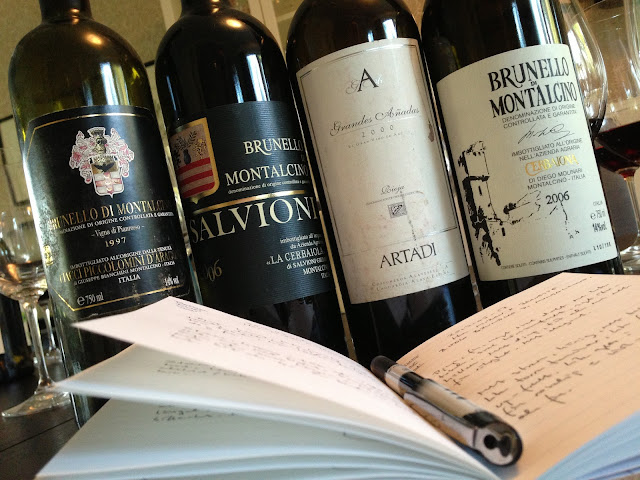 2000 Grandes Añadas, Artadi
And then we were thrown a curve ball...The nose is medium deep and nice with notes of red cherries, cranberries, leather, dry tobacco and a touch of dog fur. Has a nice warmth. Very good.
The taste is tight, seedy and more impressive than the nose with lots of sweet, juicy cherries and notes of tobacco, leather and earth. The finish is long, broad and fine. I did not peg this as an Spaniard...
89p   (tasted 2013/05)

2006 Brunello di Montalcino, Cerbaione
A Brunello producer I have been looking forward to taste - and what a wine! A cool, elegant and a touch restrained nose with fine notes of cherry pips, tobacco, gravel, violets and a fine smoky note. Very poised and full of finesse. Evolved beautifully in the glass. Real class.
The taste is young, tight and seedy with notes of rosehips, violets, hard cherry candy and cigarette ashes. There are some big tannins here but they are neatly polished. The finish goes on and on and on. I would love to taste more vintages from this producer!
95p   (tasted 2013/05) 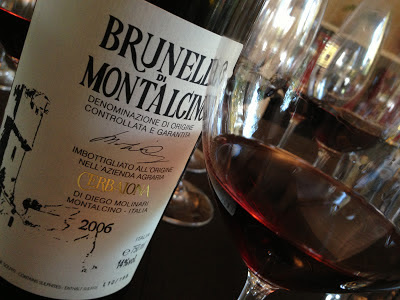 1996 Barolo Ciabot Mentin Ginestra, Domenico Clerico
After we put our noses in the glass when this was poured, we immediately shouted "we are home"!! A beautiful Nebbiolo nose with notes of lingonberries, mushrooms, rose petals, bay leaves and a touch of freshly grounded coffee. This has depth, charm and grace. Still young but there is some evolvement here.
The taste is tighter with lots of ripe red fruit and notes of mushrooms, rosehips, leather and bay leaves. The tannins are still on the perky side and come through in the finish. Very, very fine and should evolve gracefully over the next 6-8 years.
93p   (tasted 2013/05)

1999 Barolo Percristina, Domenico Clerico
Aaaaaaaah, what a stunning wine! I just love the Percristina from Clerico. Again and again it proves to be a truly world class wine. As good as this is though, it doesn´t reach the heights of the 1996...
The nose is elegant, finely tuned, deep and just stunning with gorgeous aromas of sweet lingonberries, wet asphalt, porcini, licorice and rose bushes en masse! So, so, so fine.
The taste is tight, pure and complex with notes of red cherries, lingonberries, rosehips, licorice and a touch of dark chocolate. The tannins take a firm grip around your tongue in the finish, which goes of forever it seems. Stunning juice!
97p   (tasted 2013/05) 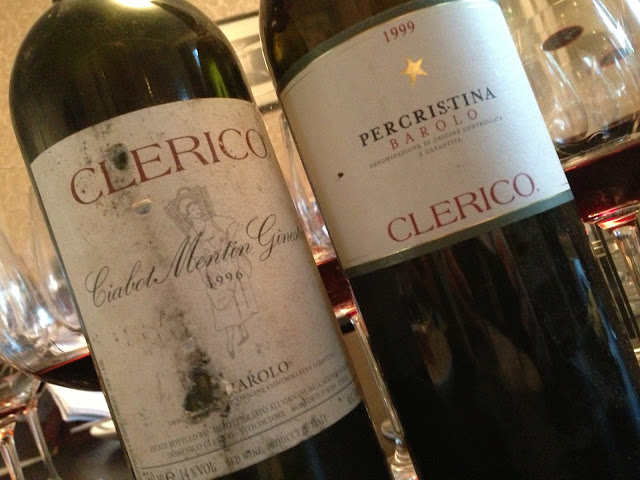 1997 Brunello di Montalcino Pertimali, Livio Sassetti
This bottle was almost as good as the one opened two months ago and behaved in the same manner. A very fine bottle of wine.
94p   (tasted 2013/05) 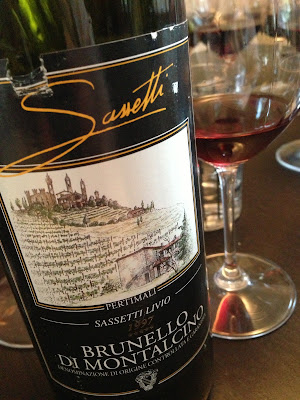 1990 Vouvray Moelleux 1er Trie Clos du Bourg, Huet
This, on the other hand, outperformed a bottle opened by M last September. An intensity of the charts, a purity that need to be tasted to believed and a length that could be counted in several minutes. But it is no 1990 Le Mont... :-) Just...
99p   (tasted 2013/05) 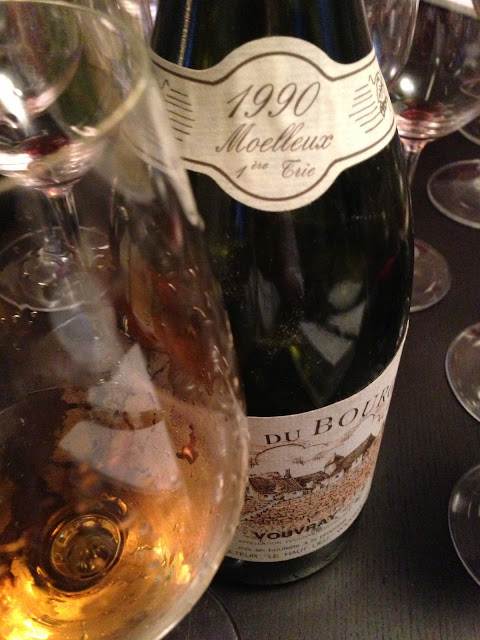 1995 Quinta do Vesuvio Vintage Port
A deep, sweet, hedonistic nose with notes of figs, pan fried nuts, milk chocolate, green raisins and some moist undergrowth. Upfront and fine, although not that deep.
The taste is big, sweet and warm with notes of raisins, assorted nuts and lots of chocolate wafers. Some alcohol warmth in the end. Very good.
88p   (tasted 2013/05) 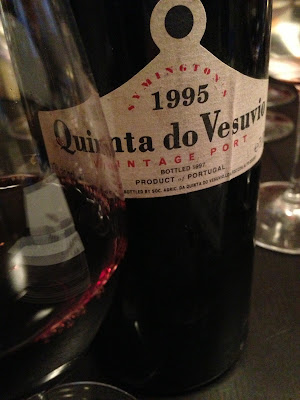