I have not tasted anything from Fattoria Montellori and when I spotted a bottle of their 2001 Salamartano.
In Supertuscans (Andrea Zanfi) the cepage is stated as 50% Cabernet Sauvignon and 50% Merlot, and since that book (a must have bye the way) was printed in 2002, I would guess that this wine consists of that blend. According to Montellori´s website the blend is now 70% Cabernet Sauvignon, 20% Cabernet Franc and 10% Merlot.
They have also cut down on the new wood, the book states that 80% is new and the website describe it as 60% new, yet the time in wood is the same, 14 months.
The first vintage of Salamartano was the 1992.

2001 Salamartano, Fattoria Montellori
The nose is really good, with some maturity and fine notes of ripe plums, pipe tobacco, pine nuts, expensive leather and a touch of asphalt. A fine depth. Ripe fruit. Some coffe notes after a while. This is very good.
The taste is tighter and more structured than the nose with notes of plums, chocolate covered black currants, tobacco, autumn leaves and graphite. A creamy texture although it ends dry after the long finish have ceased. I guess I caught this one on its apogee, but it will surely stay like this for another 3+ years. A very likable new acquaintance.
92p   (tasted 2015/07) 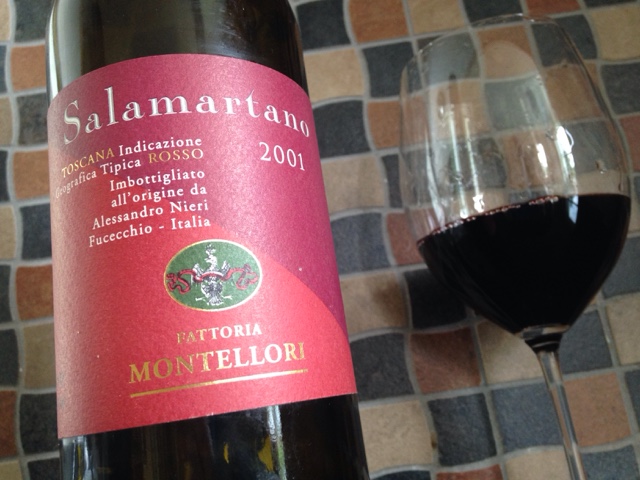