For some time I have hoarded a lot of vintages from Fontanafredda. I realized that I especially had quite a selection on vineyard designated Barolos from the 70´s. What to do? Organize a dinner around them of course!
This dinner was held in October 2008.

We started with some crostini and toppings of Serrano with caramelized onions, foie gras and lump crab salad. With these starters we had a bottle of
1983 Maximin Grünhäuser Abtsberg Riesling Auslese, von Schubert
The nose is wide open with lovely, semi-dry, yellow fruit, lots of petrol notes, rubber and sweet minerals. Very deep. Nice tone of dried peaches. Lovely maturity.
The taste is noble, elegant and very, very good with lote of sweet lemons, minerals and acidity. This is in a perfect stage of maturity. Just lovely.
92p   (tasted 2008/10)

We went on with grilled scallops with a red beet ragu. I have made this dish before and the beet ragu normally fits very well with Burgundy with some bottle age. So I opened these two bottles, both decanted for one hour. 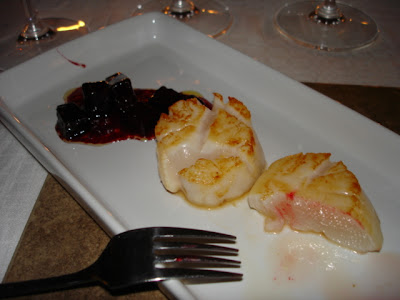 1994 Chassagme-Montrachet Les Caillerets, Domaine Ramonet
An open nose qith lots of warm fudge, crushed hazelnuts and minerals. Very good. Deep. A little touch of mushrooms soup but nothing that disturbs the overall picture.
The taste is tighter, with notes of chalk, dry lemons, minerals and a touch of wood. A long and interesting finish. Not the greatest vintage but a solid effort from Ramonet.
90p   (tasted 2008/10)

1992 Chassagne-Montrachet Les Ruchottes, Domaine Ramonet
This is something else! A big, intense, fresh and just great nose with lots of minerals, sweet lemon, lemon zest and rosemary. Very, very deep. A lot of nerve. A beautiful smoky note after a while. Great all around!
The taste is as impressive, with tightly focused fruit, lovely acidity and a long, long intense finish that goes on for over a minute. This has barely entered its drinking window, but for now I´ll drink it anytime!
96p   (tasted 2008/10) 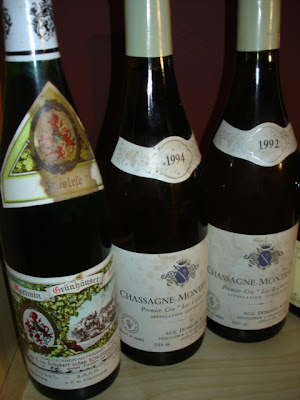 Then it was time for the Fontanafredda´s.
Flight I consisted of four 1971´s, flight II of four 1974´s and flight III of four 1978´s. I had the Barolo normale in every flight and then three vineyard wines. We tasted a total of different vineyards, all from Serralunga.
The overall quality was very good with the 1978´s in top, still on the young side. The 1974´s in generel were more mature than both the 1978 and 1971, and the 1971´s were very fresh and just about resdy to drink.
All wines were decanted two hours before the first pour.
To accompany the first flight we had a terrine of veal sweetbreads. 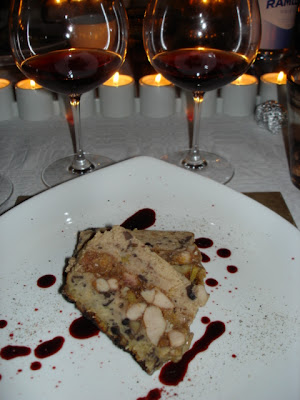 Flight I
1971 Barolo, Fontanafredda
A mature, somewhat barnyardy nose with some dark cherries, licorice and undergrowth. Good, cool fruit. A lot of autumn leaves. Very good.
The taste is nice and tight with good tannins and sweet red cherry fruit. A long, dry finish. Good. Holding well but will not get any better.
88p   (tasted 2008/10)

1971 Barolo Vigna Lazzarito, Fontanafredda
This has a deep, tight, still primary nose with dark, powerful, sweet fruit. Lots of licorice, earth, black cherries and roses. very deep. backwards. layer upon layer of dark fruit. Darker than the others.
The taste is young, tight and potent, with sour/sweet black cherries, undergrowth, licorice and some tobacco. Big and brawny but with great concentration and intensity. This is great!
95p   (tasted 2008/10) 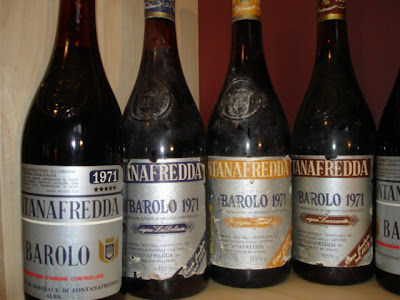 With flight II we had potato tortelli with wild mushrooms. I had infused the potato filling with rosemary butter and the combination of the potato, mushrooms and the 74 Lazzarito was to die for! 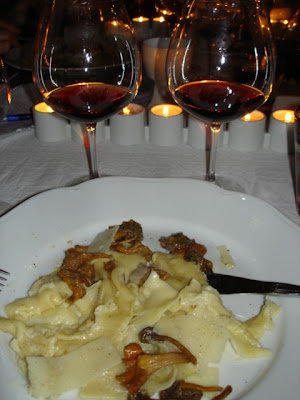 Flight II
1974 Barolo, Fontanafredda
A warm, mature, rounded nose with red, sweet fruit, especially rasberries. A touch of kerosene. Very flirty with plump fruit and mature notes. Very good.
The taste is more restrained than the nose with soft tannins, sweet and sour cherries, some undergrowth and dry tobacco. Somewhat dry tannins, but this is a charmer none the less. A nice warm feeling about it.
91p   (tasted 2008/10)

1974 Barolo Vigna Bianca, Fontanafredda
A mature and a touch dry nose with notes of dried red fruits, gravel and dry autumn leaves. Somewhat hollow, lacks middle. Dry.
The taste is tight and dry with dried red fruits, hard fudge and a touch of sherry. This is a little past its best. But I think it´s the bottle, the 78 Vigna Bianca was a solid 93p wine a while back, and its hard to believe that the 74 should be much less good. It went very well with the food though.
84p   (tasted 2008/10)

1974 Barolo Vigna La Rosa, Fontanafredda
A tight and restrained nose, with notes of tar, gravel, undergrowth and cool red fruit. This needs even more time than the Lazzarito to open up, but when it does it has a lot of sweet red fruit and a nice warm feeling about it, although it´s not as intense as the Lazzarito.
The taste is tight and concentrated with nice cool red fruit. A lot of structure. The tannins are more noticeable but overall a very good wine. Long finish. Just reaching its first steps of maturity.
93p   (tasted 2008/10) 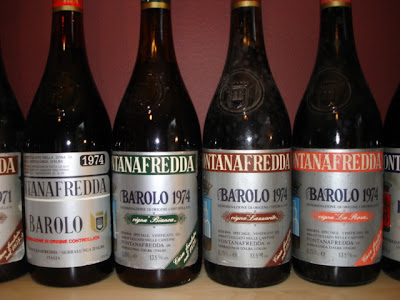 With the third flight we had a oven roasted duck with a cherry sauce and a Jerusalem artichoke terrine.

Flight III
1978 Barolo, Fontanafredda
A very deep, still young nose with notes of sweet black fruits and plenty of fresh autumn leaves. Some dried flowers as well. Very deep. Thick fruit.
The taste is tightly knit around a young, black, sweet fruit. The tannins are very noticeable in the mouth, but they are focused and sweet. Very, very good. This has a nice future.
92p   (tasted 2008/10)

1978 Barolo Vigna San Pietro, Fontanafredda
A deep, powerful, young nose with lovely black sweet fruit, worn leather, warm brick tiles and sweet undergrowth. Very, very nice. It´s not a blockbuster as the Gallaretto, but it´s just as intense and actually, even more so. Just great!
The taste is focused, intense and sweet with gorgepus black and red fruits, dried flowers, gravel and melted chocolate. A very long and lingering finish. It is very elegant in its way. I like this very, very much. Still needs another 4-6 years.
96p   (tasted 2008/10) 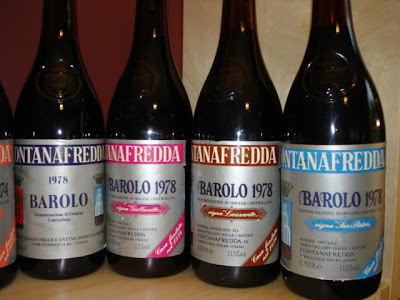 We finished the evening with some cantuccini and this sweetie
1972 Tokaji Aszu 6 puttonyos, Oresmus
A deep, elegant, semi-sweet nose with notes of dried red apples, muscovado sugar, raisins and assorted nuts. Deep and yummy.
The taste is deep. mature and velvety with yellow fruits sprinkled with sugar. Nice intensity, long and fresh. Ends with an almost dry twist. Very, very good.
91p   (tasted 2008/10)
Posted by Joakim at 16:46