The Perfect Ones - Part 7

This was my first 100p wine. In september of 1992 I attended a tasting of nine vintages of Moulin Touchais. It was a 100 year tasting - vintages between 1985 and 1885. I had tasted some old Moulin Touchais before, from the 70´s, but this possibilty to compare 100 year of the same wine was amazing. And the 1885 stood out as the most incredible wine I had tasted up to that point in time.

The other wines at the tasting are listed below. The picture is of the 1985, which I bought a case of after the tasting because of what I noted on the 1985 - "would be as great as its 100 year older sibling in due course" - I just hope it will! :-)

1885 Moulin Touchais
The colour of glowing amber. The nose soars from the glass with spectatular notes of white raisins, saffron, lemoncello, honey, cold tea, and an assortment of dried fruits. Elegant, deep and very complex. It has layer upon layer of scents and impressions. Stunningly alive and beautiful.
The taste is huge for such an old wine, with great expressions of sweet fruit, and a fantastic acidity that makes the finish taste semi dry. The finish goes on for over a minute. Every dried fruit on earth is crammed into this wine, and then some honey, tea and lemon is added. Very, very impressive and downright perfect!
100p   (tasted 1992/09) 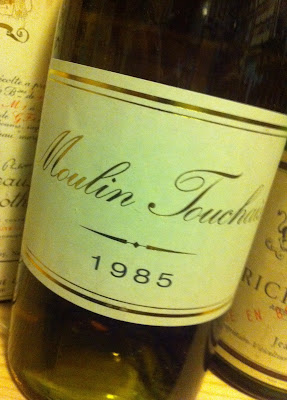