The Ten Most Memorable Wines Of 2017

Another year have passed. As always lots of good, great and gorgeous wines.
982 bottles tasted and drunk during the year (204 Baroli...), and it always hard to narrow it down to the ten that have made the most lasting impression on me. But with a glass of 2014 Gevrey-Chambertin Clos Village, Domaine des Tilleuls is becomes a tad more easy :-)

Here they are, in vintage order.
A toast to a equally great 2018!

1934 Château Branaire (Duluc-Ducru)
Interesting enough, given the fact that I don´t drink much Bordeaux nowadays, when I do, they seem to make this list every year. Three bottles this year. Go figure...
This bottle was a chance buy, no label and the seller announced it as a Branaire-Ducru from an unknown vintage. I always think that kind of setup is fun, and given the modest price, I bought it.
And glad I did, for this turned out, not only being a 1934, but a perfectly mature Bordeuax from the time when they produced wine for their children, not for drinking right out of the gate. A marvel.
96p   (tasted 2017/03) 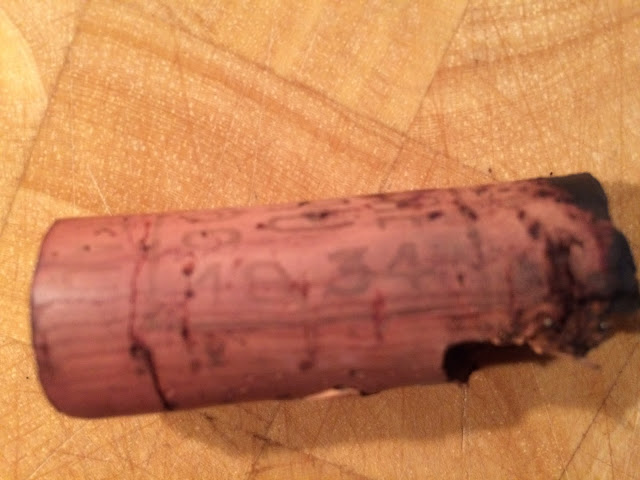 1947 Barolo, Marchesi di Barolo
A half bottle of a 70 year old Barolo, what could one hope for? It had a good level and it came from one of the greatest Barolo vintage ever, so I had some hopes.
Did it fulfill them? Oooh yes, and then some. An ethereal, beautiful, complex nose that oozes class, perfect maturity and layer upon layer of the most lovely old school Nebbiolo fruit.
When visiting Marchesi di Barolo this summer I noticed that they had a large stack of this wine but they didn´t wanted to part with any of them...
97p   (tasted 2017/06) 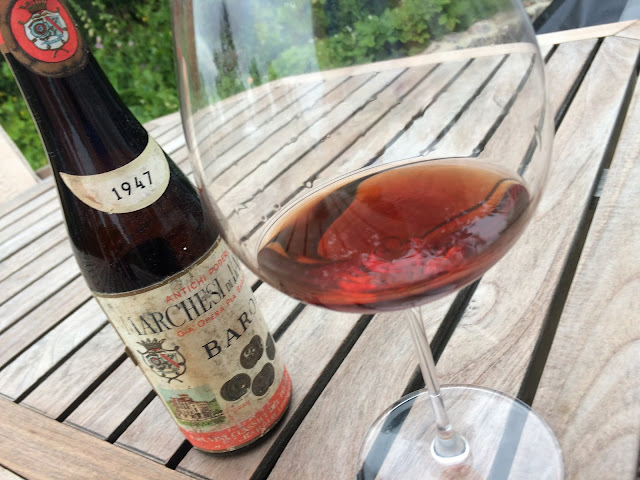 1959 Château Haut-Bailly
Haut-Bailly is one of my favourite Château and given the opportunity to taste a perfectly mature specimen was really a treat. It was tasted blind and I thought it was much younger than a 59.
Bordeaux doesn´t get much better than this. Thanks Peter!
98p   (tasted 2017/04) 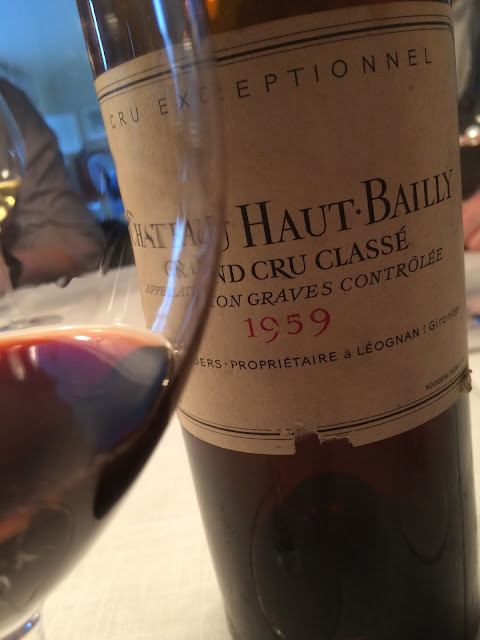 "1964 Richebourg, DRC"
This was fun. And a bottle that is hard to forget, even though it was a fake.
Having read all 168 pages on WineBerserkers about Rudy Kurniawan and his forgery business and watching the movie Sour Grapes about him, I thought, how hard can it be? And will my friends be fooled?
It turned out great - I may have a new career ahead of me...
93p   (tasted 2017/08) 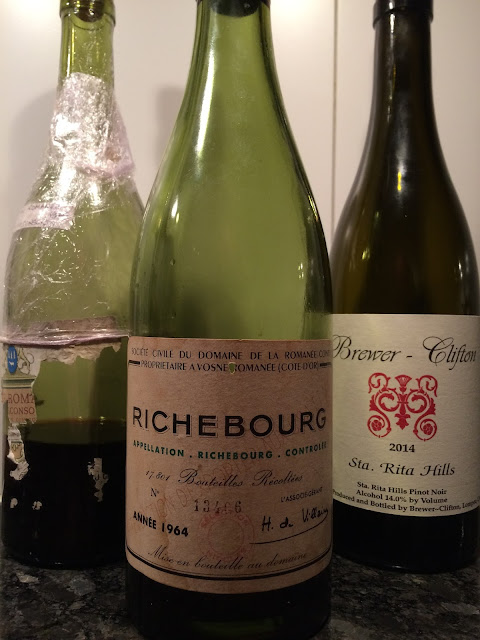 1982 Château Laville Haut-Brion
1982 is famous for its red wines, but this example proves that its white wines is a force to be reckoned with. There is a special something special about a mature white Bordeaux, with its deep haunting notes of such things as rubber, Seville oranges, nuts and, in this case, some dried up botrytis. Something really special.
98p   (tasted 2017/04) 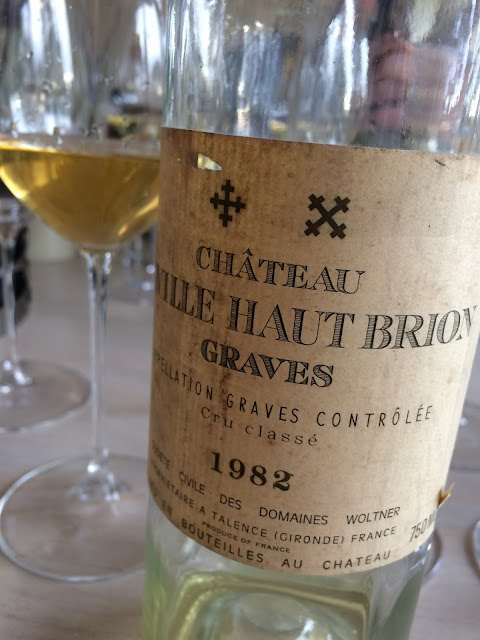 1989 Barolo, Bartolo Mascarello
A truly great memory from 2017 - drinking a perfectly mature Barolo from Bartolo Mascarelllo with Maria Teresa over dinner, just her and The Barolo Boys, four of us downing this gem at our favourite restaurant in Piedmont - La Coccinella. Life doesn´t get better than that. Thanks Maria Teresa!
97p   (tasted 2017/10)


2007 Syrah Vieilles Vignes, Simon Maye
Two friends arranged a fantastic tasting of the Syrah´s from Simon Maye. Lots of truly great wines, but the one that rose above the others, was the 2007 Vieilles Vignes. Proof that world class Syrah can come from Switzerland. Too bad that they are hard to get hold of. Thanks Mikke and Sverker!
97p   (2017/11) 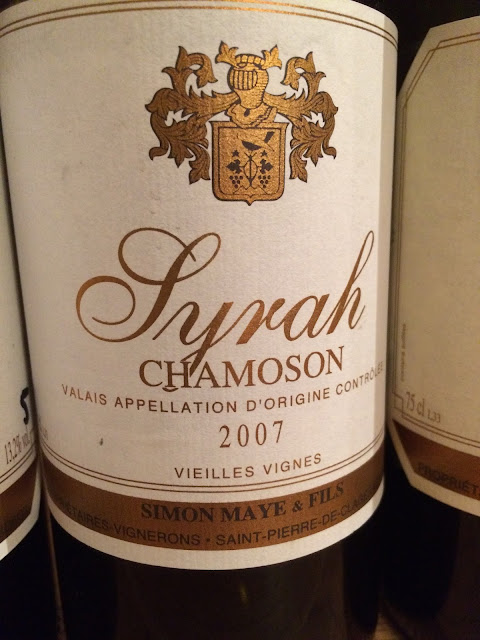 The next three are from the great Barolo vintage of 2013. Having tasted 112 different Baroli from this vintage, I could say that I have a clue.
After our visit to Piedmont in May I wrote this:
What to say about the vintage then? The one thing that striked us when tasting these wines is that - even though there are minor and major differences between for example the wines from La Morra compared to the ones from Serralunga or the differences between upbringing in old Slavonian oak or barriques (although the major part of the producers that have been using barriques are cutting down on the time the wines spends in them or abandoning them altogether) - all wines showed a racy, energetic freshness.
They are more floral than usual, the red fruits are more forward (especially strawberries - some are almost Burgundian like), there is a sweet/sour sensation to the fruit that is really fine, the tannins are sappy and very silky, and they are very fresh, lively, vibrant and almost gulpable.

Are these wines for the short term then? They will not need as much time as the 2006 or 2010 to come around, but make no mistake, even though they seem almost ligth and airy there are more stuffing to them than are immediate noticable. I must confess being smitten by this vintage and will buy plenty (update - I have...).

After tasting even more bottles on our visit in November I am certain that this is a great vintage across the board, one of those vintages that you could buy without tasting (compared to 2014 where tasting is mandatory before buying).

But on to the ones that have made a long lasting impression.

2013 Barolo Romirasco, Aldo Conterno
An almost perfect specimen that will hit that three digit mark when it have got some bottle maturity. All of the 13 Baroli from Aldo Conterno is stellar but there is something special (as in 12 and 14 as well) with the Romirasco. A breathtaking wine.
99p   (tasted 2017/05)

2013 Barolo Cannubi, Burlotto
Visiting Fabio for the first time was something special and tasting the 13 lineup put a big smile on our faces. The Acclivi and Monvigliero was lovely but the Cannubi towered above them. Tasting it again on New Years Eve confirmed my impressions. Glad that I have some bottles.
97p   (tasted 2017/05)

2013 Barolo Monfortino, Giacomo Conterno
I thought the 2010 was great when we visited in November of 2016, but that Monfortino have to take the backseat to the 2013. Perfection from start to finish, when we tasted the 13 with Roberto we just shook our heads in awe. Too bad the price have gone stratospheric. Ah well, at least lucky to have tasted it on location with Roberto.
100p   (tasted 2017/11)


The Ten Most Memorable Wines Of 2016

The Ten Most Memorable Wines Of 2013

The Ten Most Memorable Wines Of 2012

The Ten Most Memorable Wines Of 2011