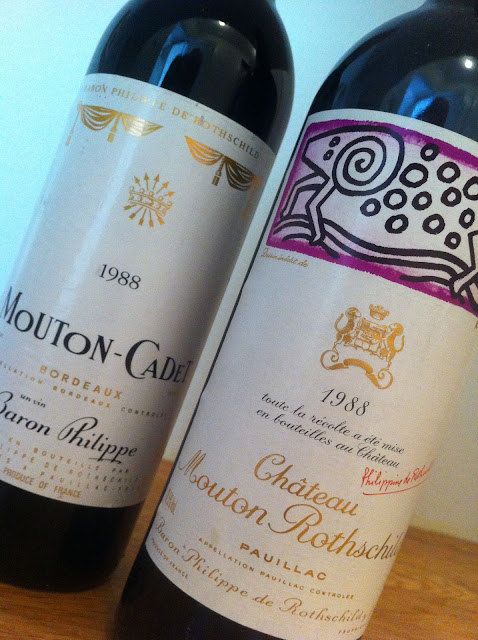 That qoute was supposedly made by the late Baron Philippe de Rothschild. I know I read it in an articel some time back. I can´t find the articel now, but the qoute stuck in my head. And when I spotted a 88 Mouton-Cadet, I thought I would take him up on it.

Mouton-Cadet was created after three disastrous vintages - 1931, 1932 and 1933 - and was released 1934 as a blend, made from Mouton Rotshschild and sold under the appellation "Bordeaux". It used to be made of lesser wine of Mouton and of the the other wines - Mouton-Baronne-Philippe/d´Armailhac and Clerc-Milon. With the introduction of Le Petit Mouton in 1993, most likely the Mouton-Cadet nowadays doesn´t contain any Mouton at all, but I have not been able to find any information about that.


1988 Mouton-Cadet
A mature, nice enough but rather light nose with notes of autumn leaves, dry red and black currants, dried up orange peel, road dust and old chocolate. A bit over the hill but still enjoyable.
The taste is mature, rounded and nicer than the nose with good red fruit and notes of bluberry bushes, dry leather, coffe and undergrowth. A medium long finish that ends nicely dry. Good with food. Still hanging in there but this is on its last leg.
82p   (tasted 2012/05)

1988 Château Mouton Rothschild
Now we have taken severel steps up the quality ladder! The nose is great, with lots of sweet black currants, Valrhona chocolate, pipe tobacco, leather and that unmistakable eukalyptus and freshly grounded coffee note that is Mouton. A lovely maturity. Sweet and fine.
The taste is medium big with a more restrained profile than the nose. Fine notes of red and black currants sugared coffee, autumn leaves and a dried up chocolate cake. The finish is long, dry and elegant. What Broadbent would call a lunchon claret....if I only could drink this with my luch every day I would be happy! Reminds me of the 1981. I like this a lot.
90p   (tasted 2012/05) 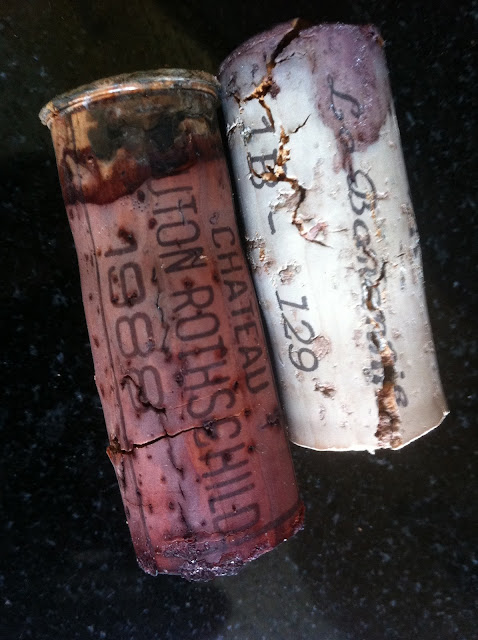