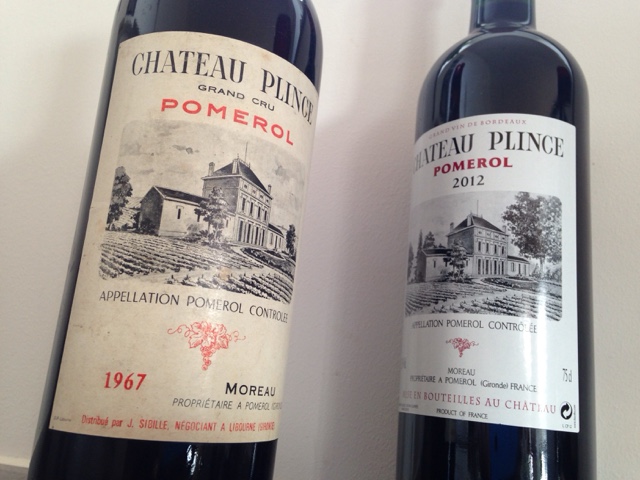 I haven´t tasted much from Château Plince over the years, therefore it should be fun to compare this vintages, 45 years apart.
This 9 ha estate makes a wine that consists, from 2005 when all Cabernet Sauvignon was pulled out, of 70% Merlot and 30% Cabernet Franc. Before 2005 10% Cabernet Sauvignon was included in the blend. Nowadays it spends 18 months on on third new oak before release. How it was done in 1967 I have now idea. :-)

Both 2012 and 1967 are, at first glance, considered to be rather weak vintages. But that is not the case when it comes to Pomerol. Both vintages favored the early ripening and harvested Merlot.

1967 Château Plince
A good looking bottle with a base neck level. The cork broke in several pieces. When first poured it reveals a soft, shy nose that need some coaxing to come around. But how would you feel if you were trapped for 49 years and then let out?!
However, with air things starts to happen, the nose broadens and offer up nice scents of dried plums, earth, iron and corinthians. A fine mature nose with clean stables and sugared coffee. Maybe not that deep but very much alive and kicking (at least some).
The taste is round, warm and mature with notes of dry plums, warm rocks, coffee powder and old wood. The finish is on the short side but it delivers some elegance in that old school Bordeaux fashion. Really good. Parker describes Plince in general terms as "capable of aging for 8-10 years". This bottle beat that assesment with 40 years...
85p   (tasted 2016/04)

2012 Château Plince
The very much younger version opens with a upfront, berry nose with vanilla covered black currants (though there is no Cab Sauvignon in the blend) and plums with additional notes of violets, freshly roasted coffee and new leather. A bit international in style, would I have pegged this as a Bordeaux given blind? I don´t know. The fruit is good though, with nice warmth and prescence. This is my verdict for day one. On day two it has calmed down and shows more distinct characteristics of a young Bordeaux. Very good.
The taste is also young, fruity and direct with notes of ripe plums, fresly brewed coffee, dark cookie dough and new leather. Initially soft and sweet but in the finish there are some firm tannins that reveal some cocoa bitterness. On day two those tannins are very nicely integrated and it is drinking really fine then. If you open a bottle now decant for a few hours, or just wait 45 years.
87p   (tasted 2016/04)