Five Bottles Of Spanna & One Bottle Of Inferno From The Greatest Vintage Ever... 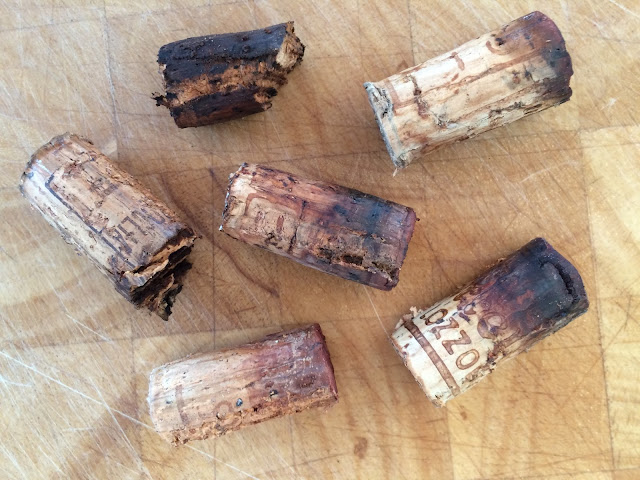 ...which, as everyone knows, is 1964!
It was my turn to host our tasting groups monthly tasting. I opened these.

Spanna is the local name for Nebbiolo in the eastern Piedmont, where the DOCG Gattinara is situated. Gattinara is known for producing wines that can age for decades, and judging from these bottles, surely as long as the more celebrated wines from Barolo. And these can still be bought for a song.
All decanted 1,5 hours before the first pour.

1964 Spanna, G. Troglia
A deep, spicy nose with notes of dried cranberries, Asian spices, dried strawberries and lots and lots of rose petals. A very fine dried up sweetness. Very, very good. Kept on evolving for the couple of hours we had them in our glasses.
The taste is tight, mature and dry with notes of lingonberries, sand, undergrowth and mushrooms. A medium long, balanced finish. Very good. Not a bit dried out.
89p   (tasted 2016/08) 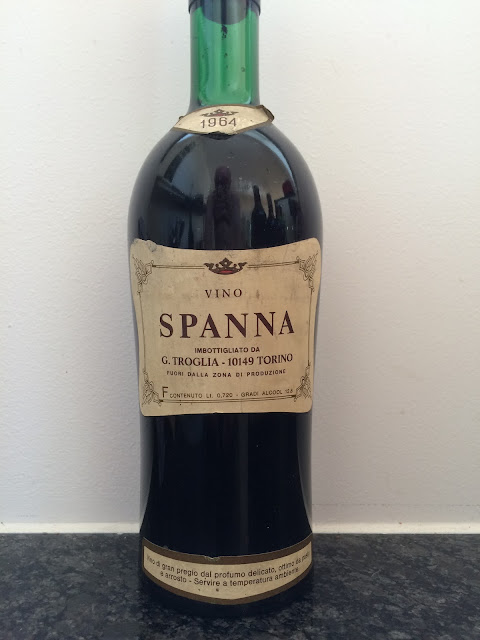 1964 Spanna, Fratelli Berteletti
A stunner from the first pour until the last sip. The nose is big, mature and velvety with notes of dried black cherries, liquorice, asphalt and dried flowers. Very deep. Some coffe ground notes after a while. Very much alive and kicking.
The taste is broad and steady with notes of black olives, dried mushrooms, rosehips and warm gravel. Long and rich. This is really good. Given this blind I would have guessed it to be from the 80´s. Will go on for another 20 years.
93p   (tasted 2016/08) 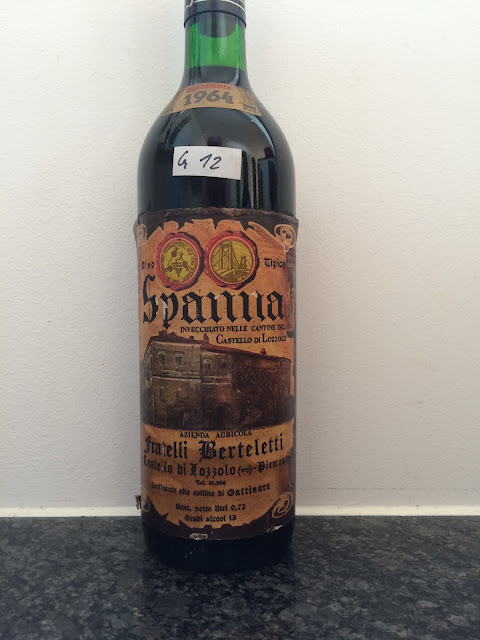 1964 Spanna Santachiara, Mario Antoniolo
On paper, the best of the bunch. Antoniolo is a well known producer of high quality Spanna, but unfortunately, this bottle have probably spend part of its life in a very warm place - big, blowsy, with detergent, moldy and cooked notes. The taste is dry, dark and rather hollow. Tasteable but not really drinkable.
63p   (tasted 2016/08) 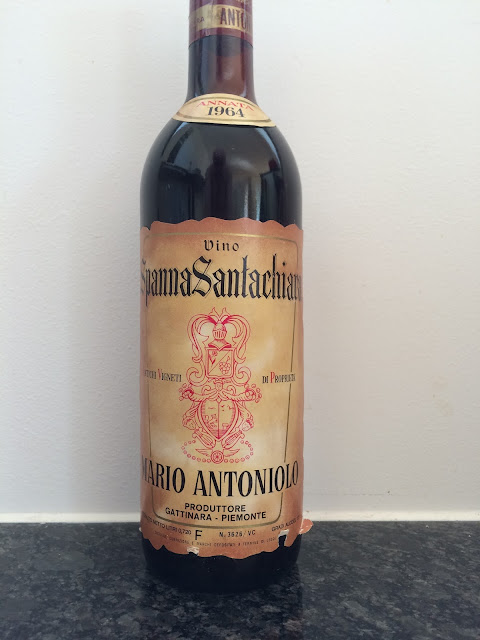 1964 Inferno, Enologica Valtellinese
The dark horse in the line up. Made from the same grape, Nebbiolo, although in Valtellina it is known as Chiavennasca. I, who knew the order, thought it had a slight different character. The nose is light, mature and finely perfumed with notes of red currants, dried strawberries, gravel and some cigarette ashes. A high, pure nose. Perfectly mature.
The taste is cool and elegant with fine mature red fruit and stony notes. A medium long, balanced finish with velvety tannins. As with the others, has held up great over the years. Very, very good.
89p   (tasted 2016/08) 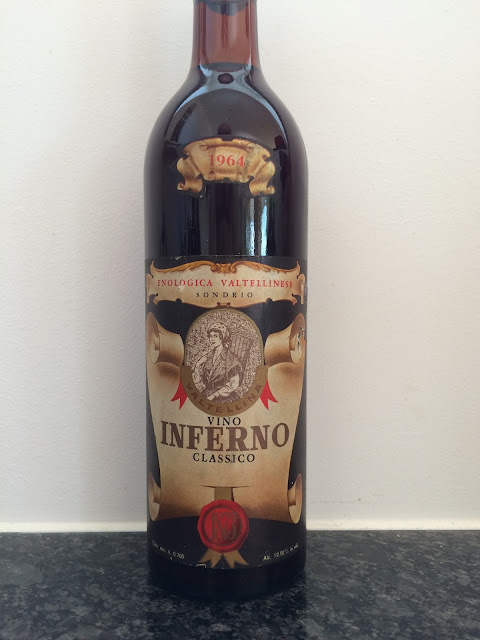 1964 Spanna Riserva, Umberto Fiore
My second favourite in the line up. This Spanna shows a deep, warm nose with notes of ripe red cherries, liquorice, spices and beet root juice. Some soapy aromas comes through with air. Complex and fine. Mature of course, but wears its 52 years with ease.
The taste is broad and tight with notes of dried red and black cherries, forest floor, spices and tobacco. A long, warm finish with still a good punch. Drinking great on this evening and bottles like this would go on for another 10 years.
91p   (tasted 2016/08) 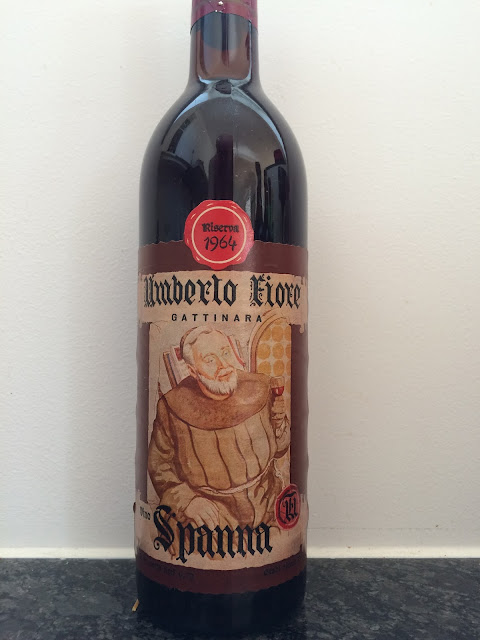 1964 Spanna, Cantine Curti
The last bottle in the line up displays a mature nose with notes of dried red fruits, warm gravel, dried flowers and some detergent scents. A touch of VA. A little loose around the edges. Good though.
The taste is cool, mature and seady with notes of lingonberries, gravel, moist earth and band aid. A medium long finish that ends dry. Has past its prime but still has some vigour. Went well with the food.
82p   (tasted 2016/08) 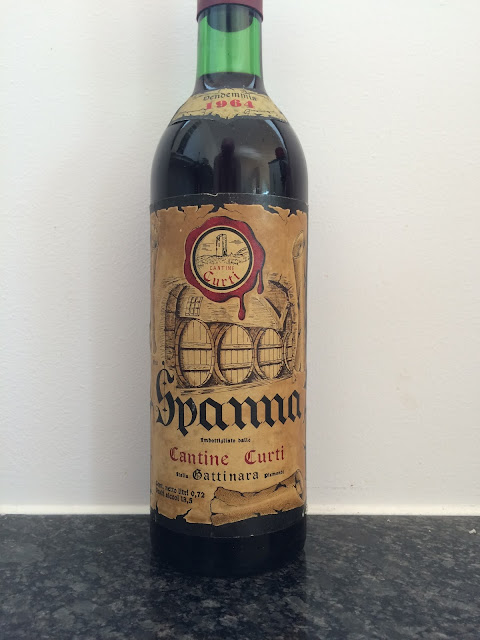 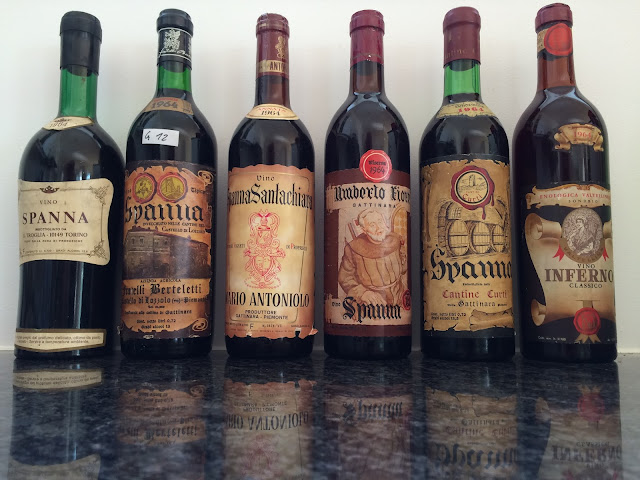