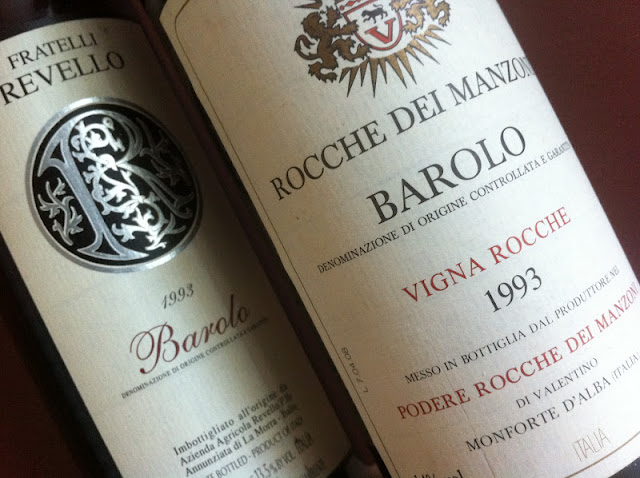 1993 is a vintage that have lived its life mostly under the radar, sandwiched between the great vintages of 1989/1990 and the string of fine vintages starting with the 1995. I find the 1993´s to be a fine, useful vintage that doesn´t excel in complexity but well in drinkability, especially for a Barolo vintage. Most 1993´s have now matured but they still offer some real drinking pleasure.
Two 1993´s that really are magnificent wines are the Bric dël Fiasc from Scavino and the Arborina from Altare.
Some days ago I opened two more 1993`s that proved the point on drinkability.

1993 Barolo, Fratelli Revello
A broad, mature, sweet nose with notes of ripe cherries, pipe tobacco, muscovado sugar, old leather and autumn leaves. Round and fine. Fully mature on the nose.
The taste is at that nice maturity level where the fruit is sweet and round, the tannins have nicely melted and the acidity keeps everything in check. In short, a lovely mouthful. Notes of cherry candy, balsamic vinegar, dry chocolate and earth. What it lacks is complexity. A lovely drinking wine but it doesn´t offer up a multidimensional character. But what the heck, sometimes is just about pleasure, right...:-)
86p   (tasted 2012/08)

1993 Barolo Vigna Rocche, Rocche Dei Manzoni
This, on the other hand, have complexity, and a winning personality. The nose is big, mature and lovely with notes of ripe red cherries, lingonberries, bucketfulls of rosehips and dried mushrooms, licorice and moist undergrowth. Deep and intoxicating. After a while a gorgeous note of cherry jam with bay leaves reveals itself. Stunning to just sit and sniff.
The taste can almost match the great nose but the structure in the mouth is a little more foursquare. There are fine notes of cherry pie, dried mushrooms, rosehips and leather, but the tannins haven´t melted into the fruit in the same way as in the Revello, and are a bit "on the side". The finish is long, warm and fine. I think that this one isn´t going to get any better, so it was high time drinking it.
91p   (tasted 2012/08) 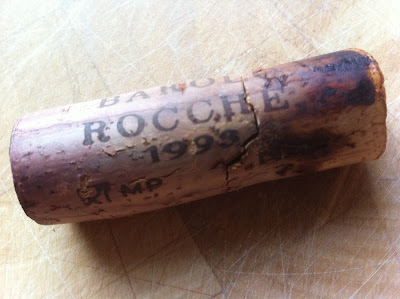