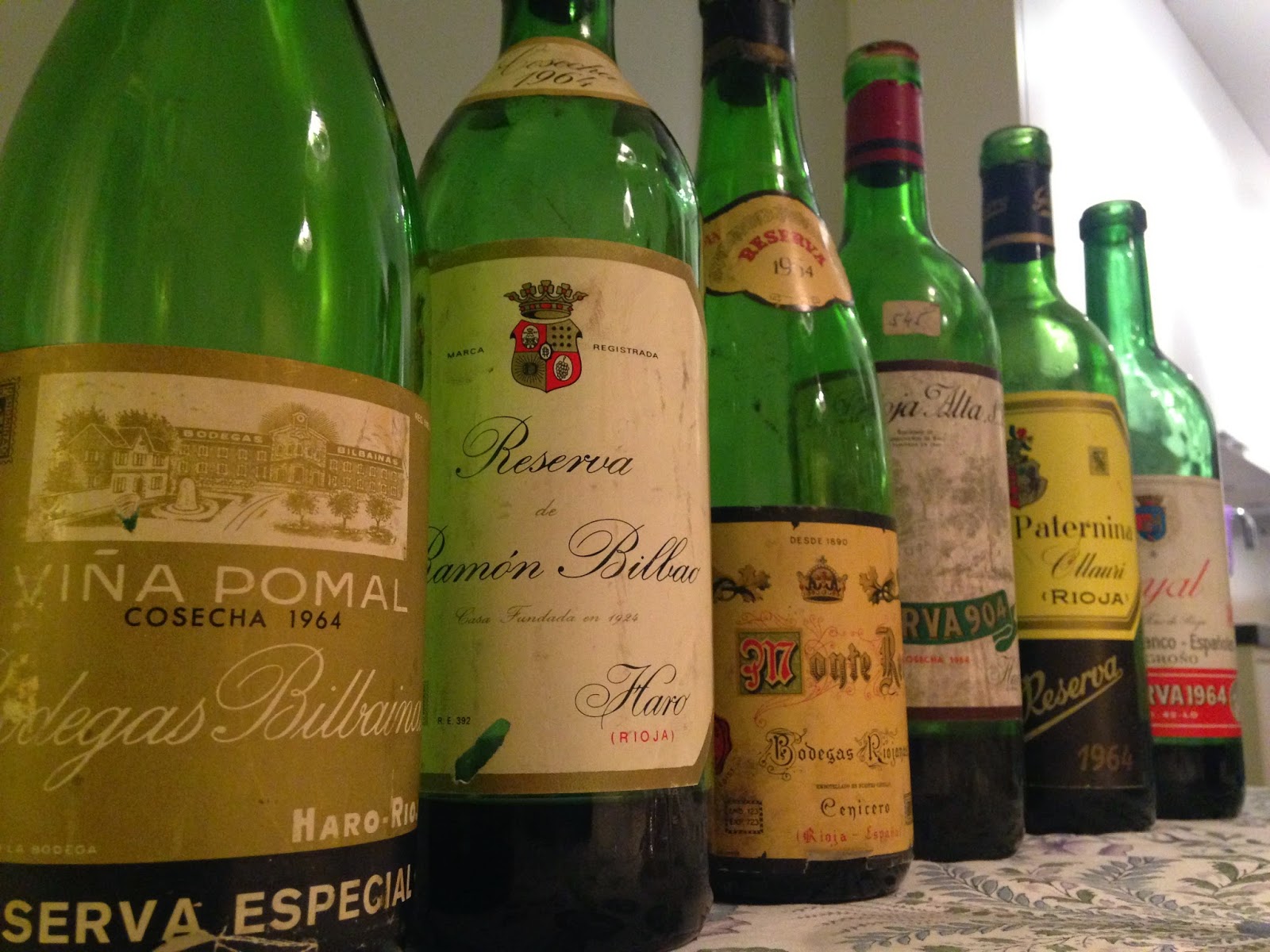 Another day, another tasting of wines from 1964, but I carry on... This time at Oscar´s place, a native Spaniard, who I thought would like to taste these wines. We all did. Except for one bottle, they were brimming with life and on top of their game. Too bad that was all of my Rioja´s from 1964.
Ah well, the 64´s from Chianti is waiting... :-)

We started with some cold cuts and two mature Riesling´s. Guess from which vintage? :-)
1964 Rüdesheimer Bilchofsberg Riesling Spätlese Cabinet Naturrein, Staatsweinguter Eltville
A mature, round, soft nose with notes of dried apricots, rubber boots, wet asphalt and candied orange peel. A fine earthiness. Fully mature and a bit weak.
The taste is semi dry and medium bodied with notes of dried fruit, band aid, grapefruit and moist earth. A medium long finish that ends dry. Good but I guess this has seen better days.
83p   (tasted 2014/11) 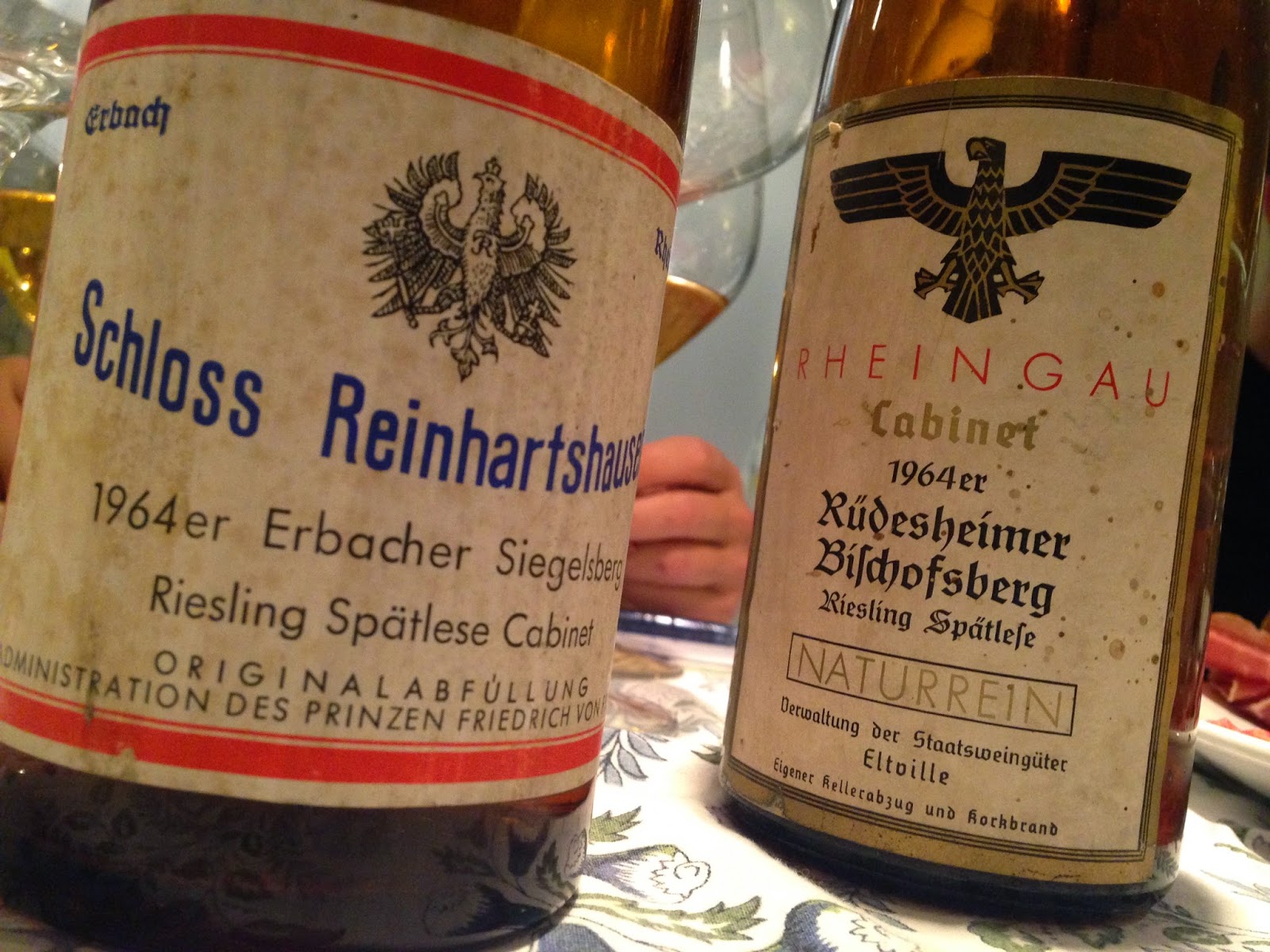 1964 Erbacher Siegelsberg Riesling Spätlese Cabinet, Schloss Reinhartshausener
This is definitely more sprightly and fresh. A very fine nose with notes of sweet lemons, peaches, minerals, mosquito repellent and a petrol station in a distance. Complex, elegant and fine.
The taste is cool, earthy and refined with notes of sweet/sour lemons, white currants, dried flowers, rubber and a fine bitterness. A long, balanced finish. This has matured into a fine bottle of Riesling.
91p   (tasted 2014/11)

Then we moved on to the Rioja bottles. Oscar had prepared a dish with a succulent deer and a creamy chanterelle cream, and it went perfect with the mature Tempranillo´s.
All decanted one hour before the first pour.
1964 Viña Pomal Reserva Especial, Bodegas Bilbainas
The nose is beautifully mature with notes of vanilla dusted plums, red currants, stables and some oil scent. A high strung, deep nose. Some warm dust. Very good.
The taste is warm and mature with notes of ripe red apples, earth, Christmas spices and old leather. Fully mature and a very good drink.
88p   (tasted 2014/11) 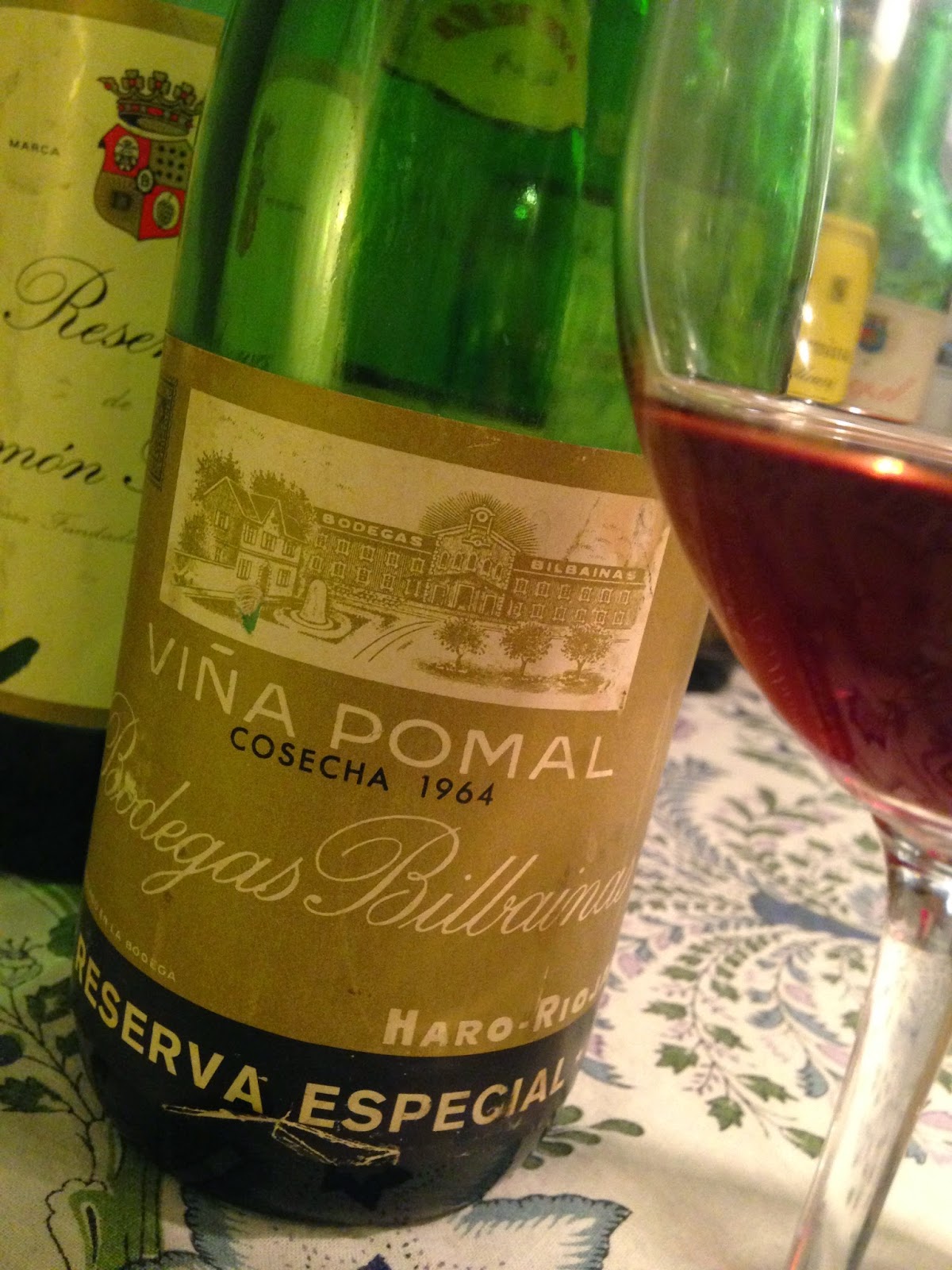 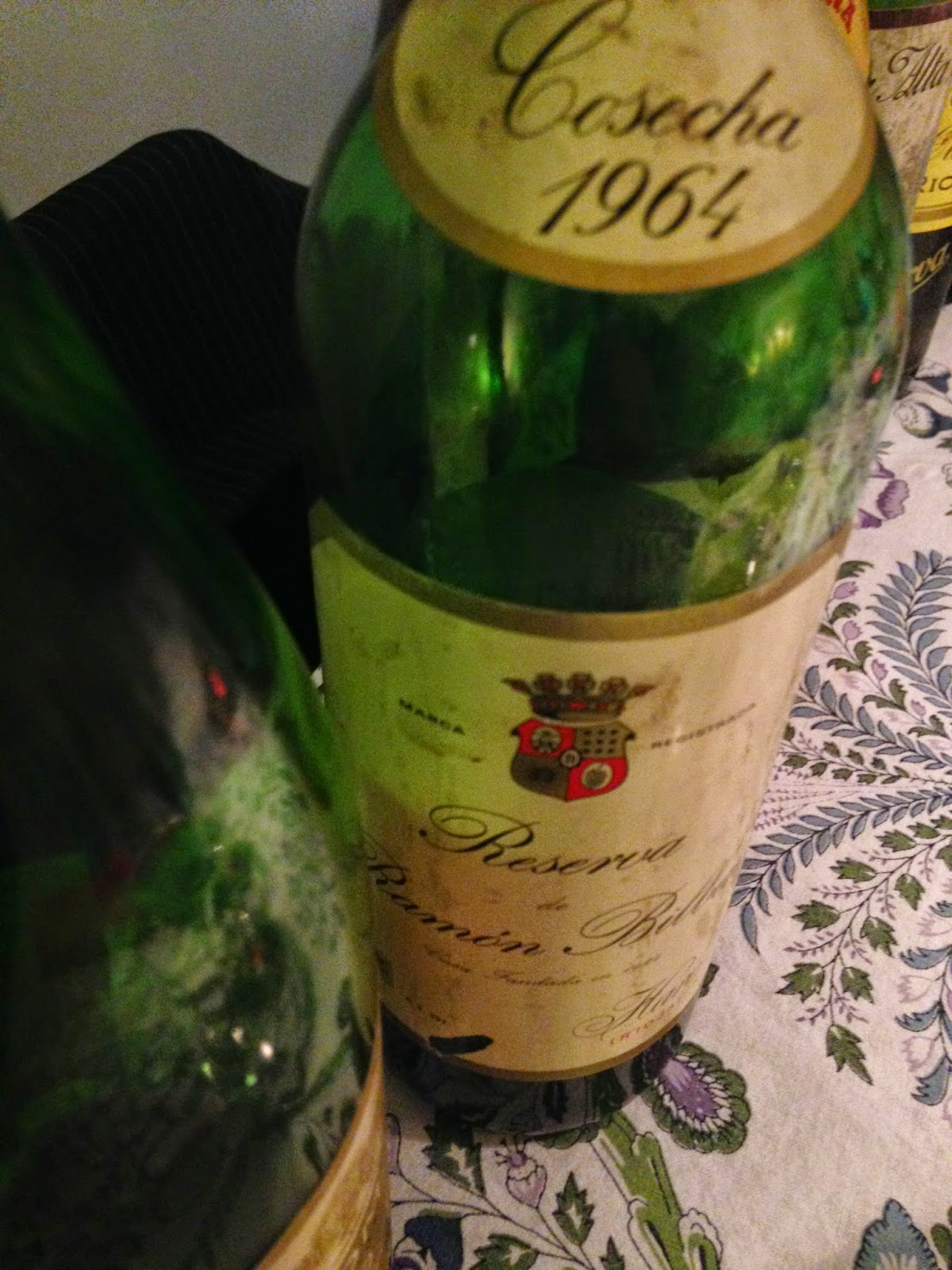 1964 Reserva, Ramon Bilbao
This bottle was the only let down. It started of nicely with warm red fruits, pipe tobacco and undergrowth but wit air the fruit disappeared and a red wine vinegar kind of nose emerged. Too bad.
The taste took the same journey, at first very good but soon got linear and lean.
74p   (tasted 2014/11)

1964 Monte Real Gran Reserva, Bodegas Riojanas
My winner. This beauty consists of 75% Tempranillo, 15% Mazuelo and 10% Graciano. The nose is velvety, deep and intense with notes of dried strawberries, plums, bonfire and some stable scents. Fresh as a daisy and with excellent concentration and class.
The taste is ripe and steady with notes of red and black cherries, dried strawberries, a touch of vanilla pods and some fine animal notes. Complex and lingering. A very fine acidity. A stunning wine, and this will go on for years and years.
95p   (tasted 2014/11) 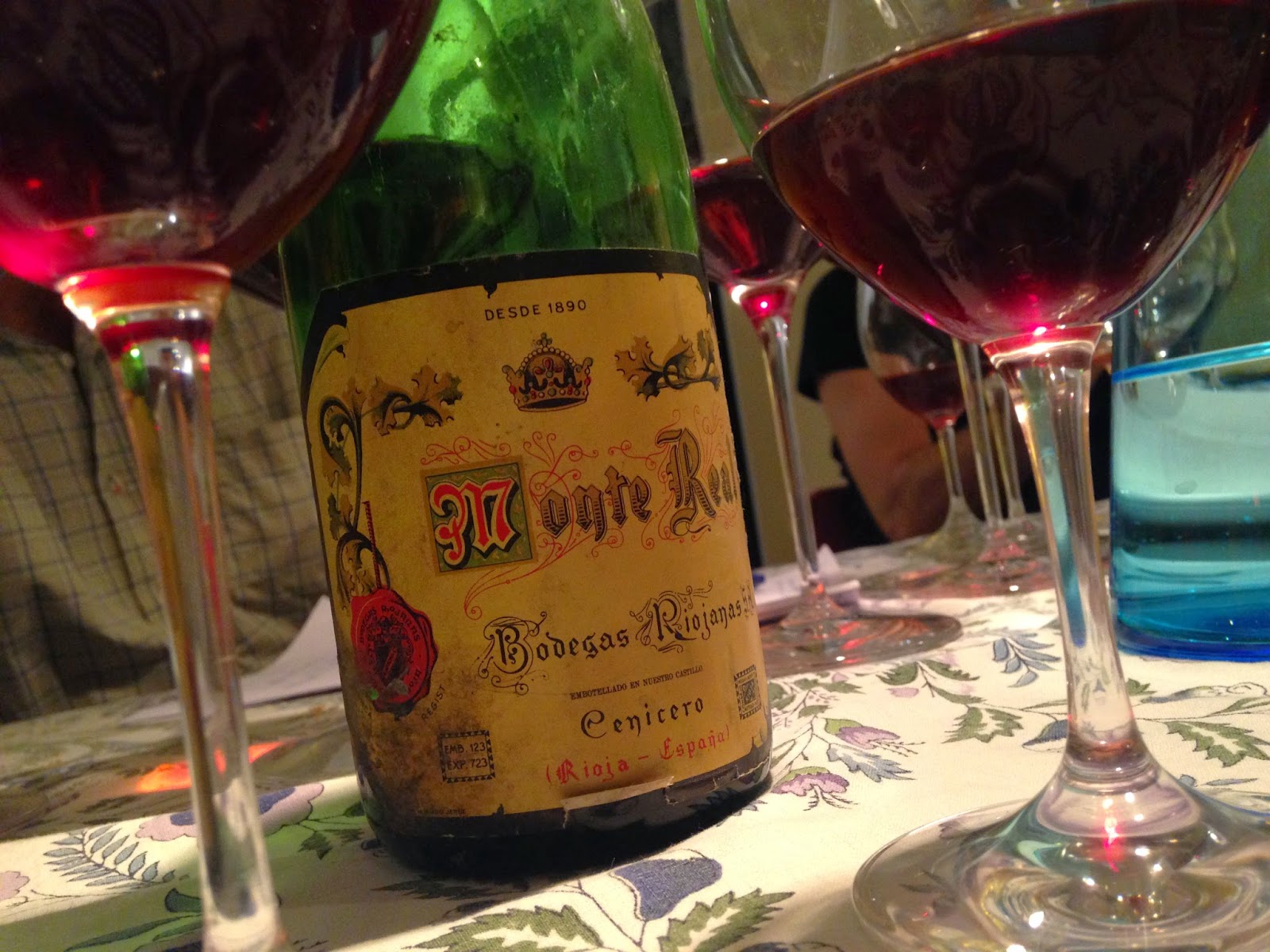 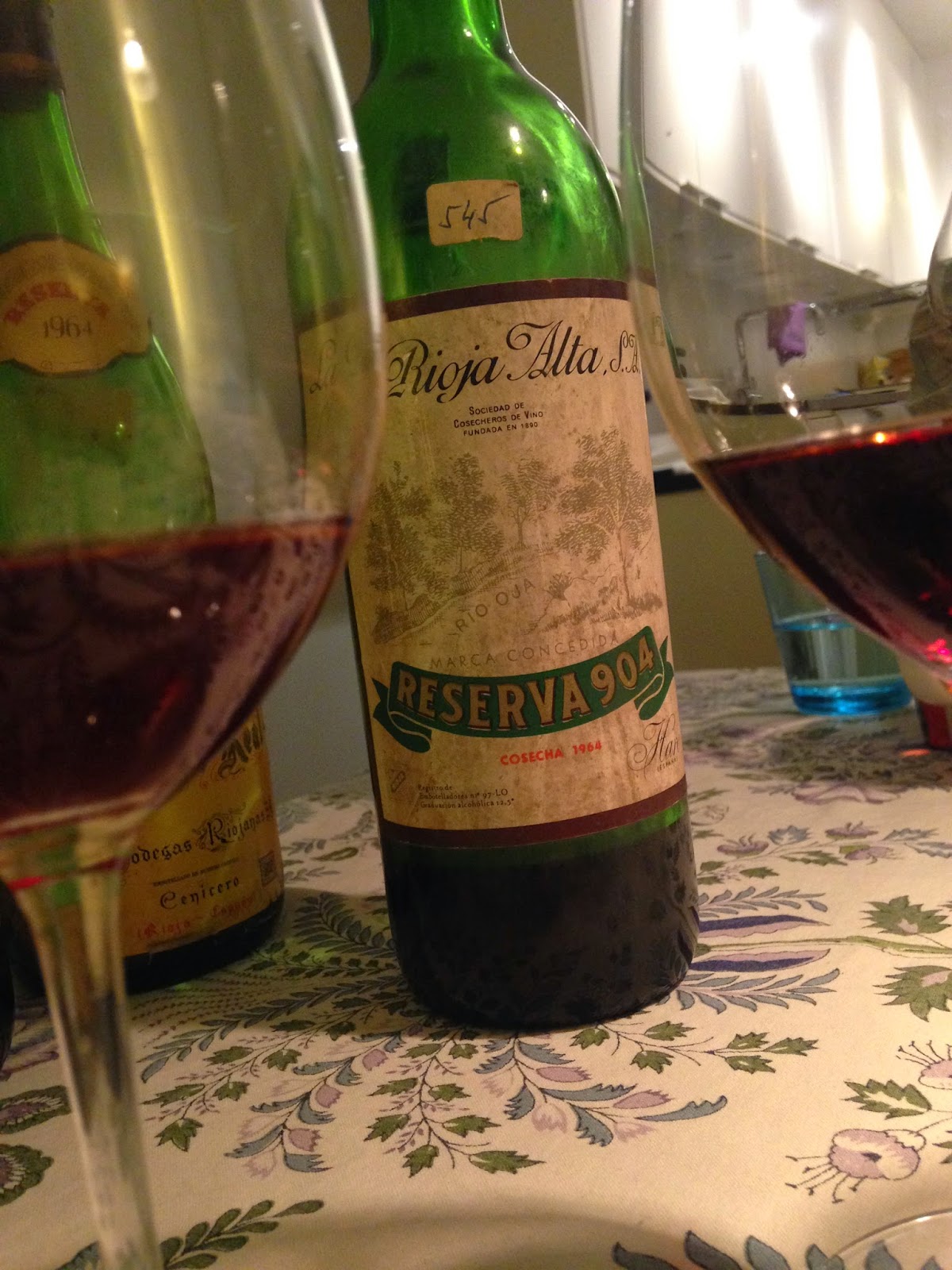 1964 Gran Reserva 904, La Rioja Alta
This is a long standing favourite of mine, I usually prefer this one to the Gran Reserva 890. I have found memories of the 1978 and 1982. But this is my first test drive with the 1964. And what a ride! The nose is deep and mature and hauntingly beautiful with ripe red fruits, liquorice, moist undergrowth, leather and a hint of dill. Very, very fine.
The taste is full flavoured and velvety with notes of vanilla cooked red cherries, fresh stables, dill and moist earth. Very, very long, balanced and deep down yummy!
93p   (tasted 2014/11)

1964 Gran Reserva, Federico Paternino
A tight, mature, warm nose that started out a bit restrained and even if it opened up nicely it had a restrained character all evening. Fine notes of dusty earth, black cherries, coffee powder and fresh stables. Very, very good.
The taste is mature, tight and warm with notes of red and black cherries, dried plums, cold coffee, leather and a iron note. Long and structured. Not as open and sweet as some of the others but very, very good in its restrained style.
91p   (tasted 2014/11) 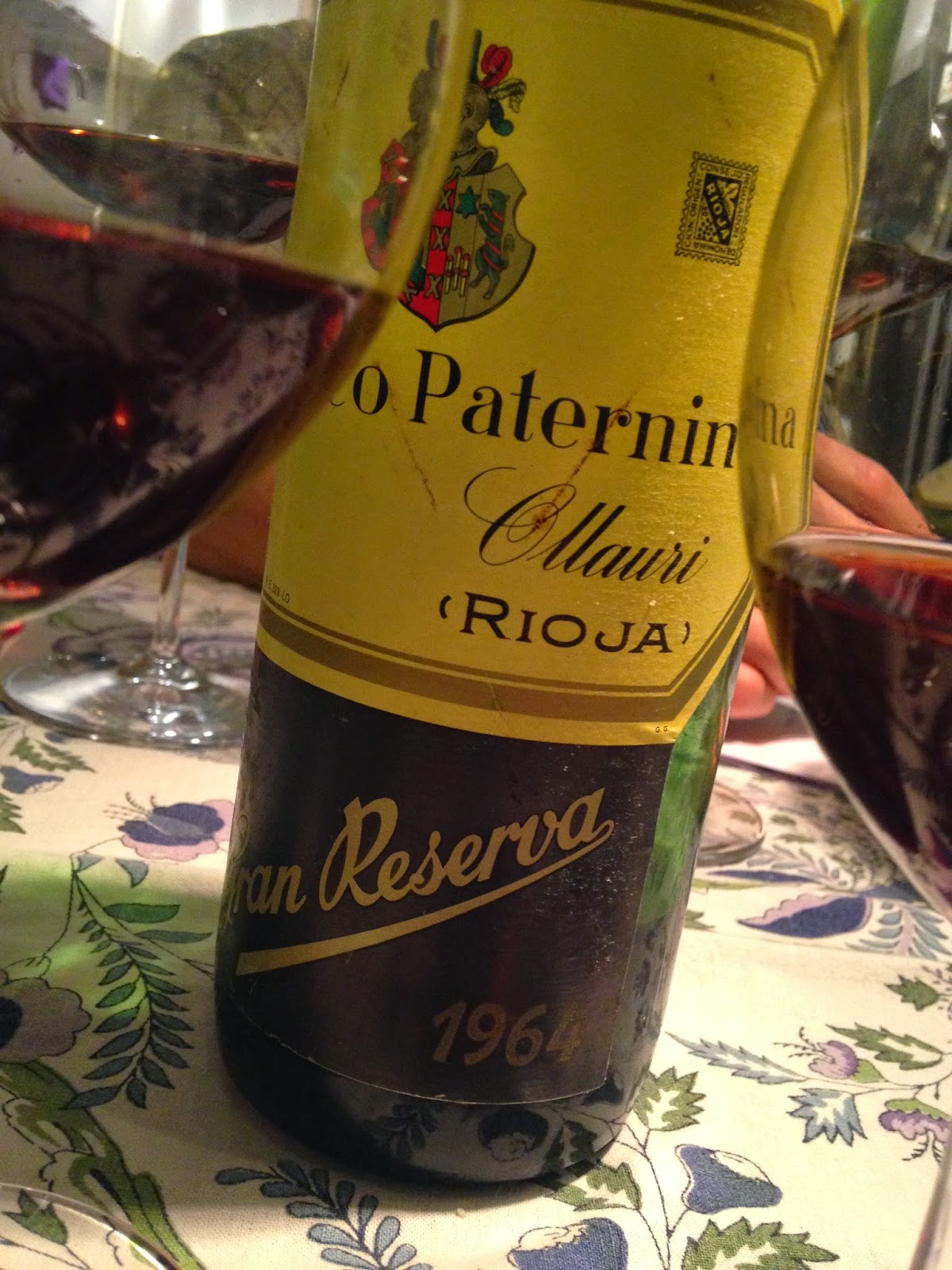 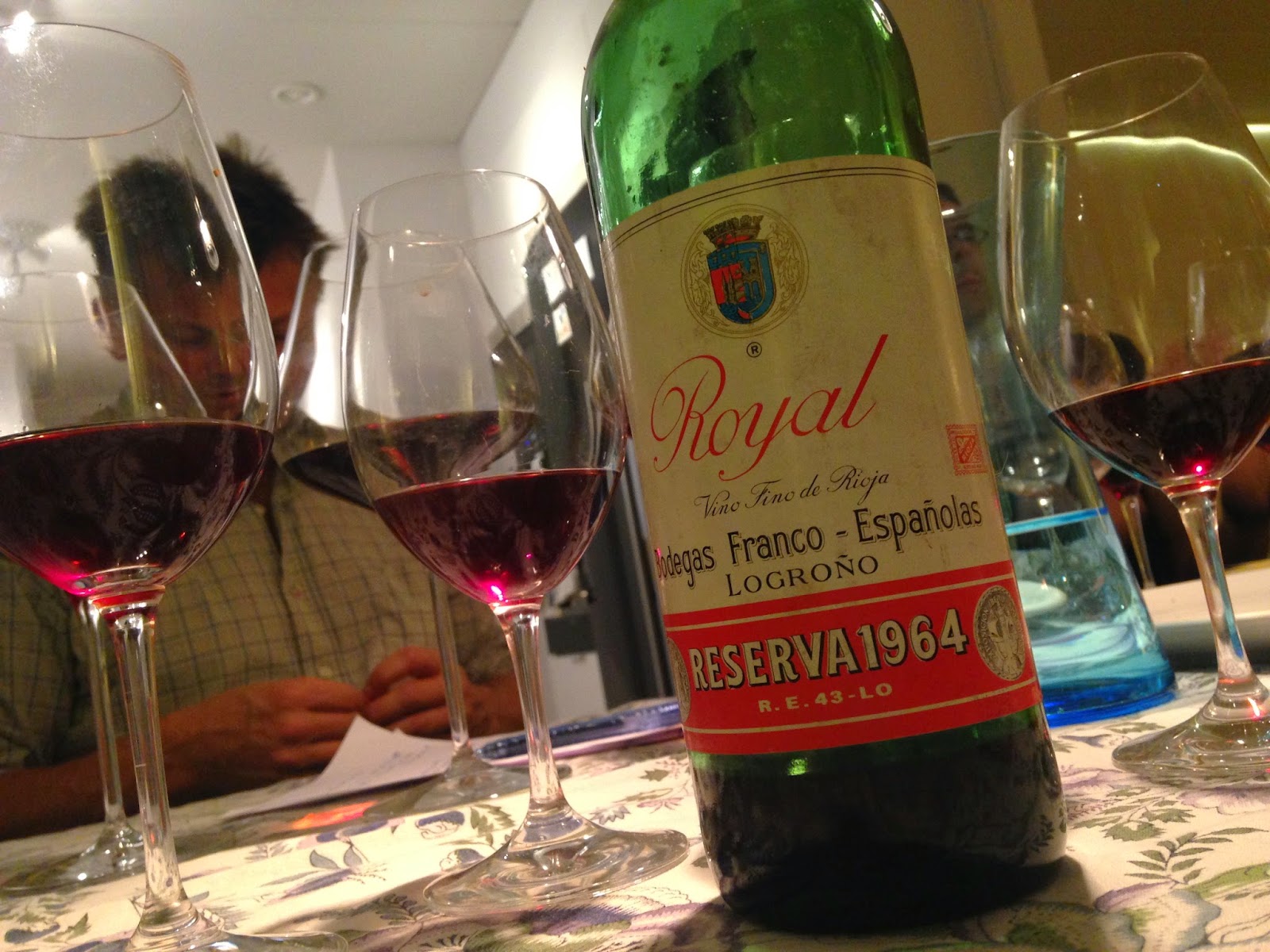 1964 Royal Reserva, Bodegas Franco Españolas
Having only tasted the odd bottle years ago from this producer, this was a pleasant surprise. The nose is deep, warm and spicy with notes of sweet red currants, warm tiles, tobacco and a hint of dill. From time to time it reminds me of a mature Bordeaux. Great wine.
The taste is warm, mature and round with notes of ripe red currants, dried strawberries, Christmas spices and warm earth. A very long, balanced finish with a fine warmth. This is great!
93p   (tasted 2014/11)

NV Moscatel Toneles, A. R. Valdespino
I had plans to bring a fortified 1964 for dessert, but the bottle had leaked so I thought that we could cope with the Rioja´s. But Oscar thought otherwise and opened this stunner for dessert.
This 100 yeal old Solera has apparently earned a 100p score from you-know-who. And darn it, he´s almost right! The nose is bottomless deep with gorgeous notes of balsamic vinegar cooked plums, fermenting red apples, decaying flowers, figs and raspberry liquorice. Impressive and hedonistic to say the least. Stunning stuff.
The taste is like drinking syrup, very viscous, with notes of Tarte tatin, sweet plums, dried flowers and expensive perfume. There is plenty of acidity to cut through the richness. The length is counted in minutes. A great, great wine. This will live forever.
96p   (tasted 2014/11) 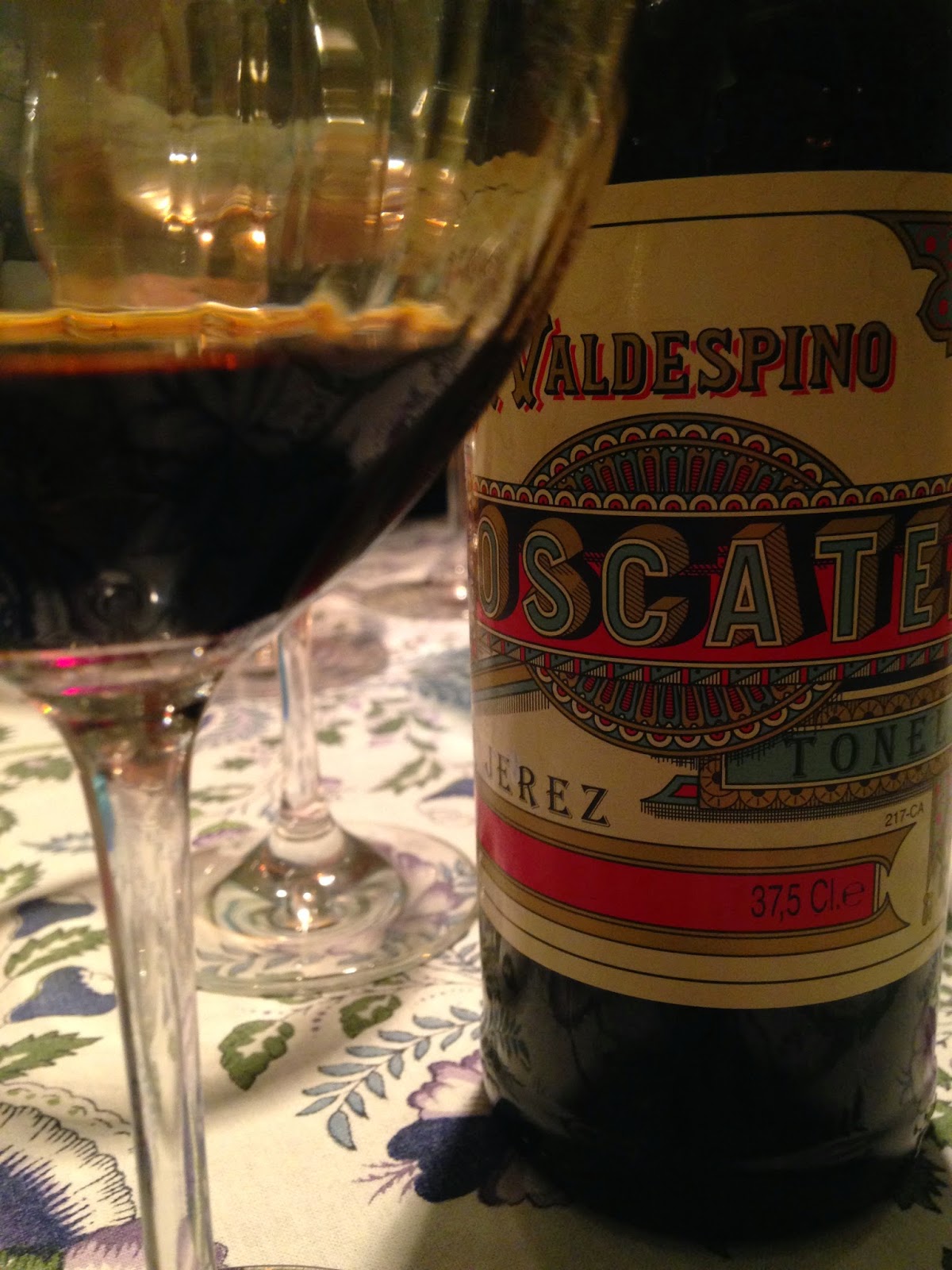