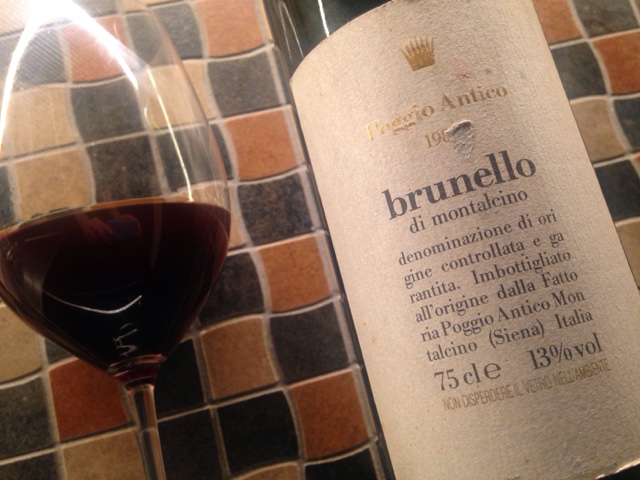 After a long day I need something mature to wind down with. I thought that this bottle would do the trick.

1987 Brunello di Montalcino, Poggio Antico
I assuming that this is a 1987. I bought a case of mixed 87 Brunello´s a while back (see earlier notes below). This came with the others, although part of the vintage is scraped of the label, so I can´t be certain. And the cork isn´t stamped with the vintage either. Ah, well, lets drink it.
The nose is medium deep and nicely put together with notes of sweet/sour cherries, road dust, liquorice, dried rosemary and dark chocolate. Fully mature but not overly so. Good.
The taste is round, mature and broad with notes of dried cherries, raspberry liquorice, chocolate mousse and warm gravel. Medium long, warm and yummy. Not a spectacular complex wine but a nice mouthful of mature Sangiovese. Went well with a pasta dish with chicken, tarragon, mustard and heaps of Parmigiano.
87p   (tasted 2015/11)