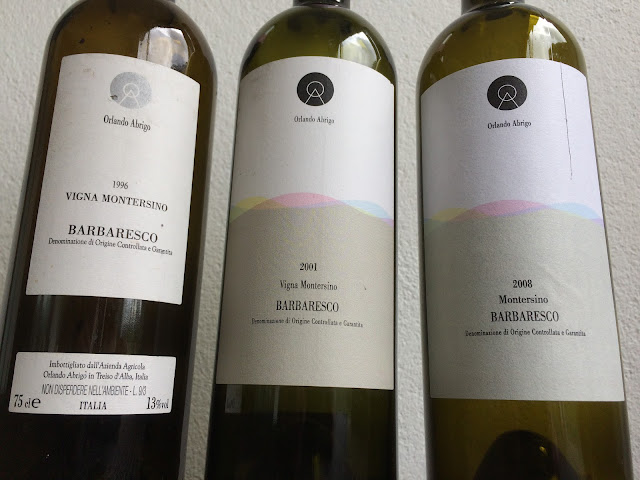 1996 Barbaresco Vigna Montersino, Orlando Abrigo
A deep, somewhat mature nose with juicy cherry fruit and notes of herbs, smoke and tobacco. A fine warmth to the fruit. Deep and fine.
The taste is round, velvety and fine with notes of dried cherries, raspberry licorice, earth and tobacco. Almost fully mature. Some sandy, soft tannins at the end of the finish. Very, very good.
90p   (tasted 2017/06)

2001 Barbaresco Vigna Montersino, Orlando Abrigo
The 01 has a lovely focused, deep, fresh nose with notes of ripe red cherries, undergrowth, rosehips and tobacco. Very deep. More sour/sweet cherries after a while. Very fine.
The taste is tight and concentrated with a smidgen of maturity and notes of ripe red cherries, violets, forest floor, dried mushrooms and tobacco. A very long, distinct finish. Still on the young side of things, give it another 5+ years.
92p   (tasted 2017/06)

2008 Barbaresco Montersino, Orlando Abrigo
A deep, dusty nose with notes of dried red berries, chalk, tobacco and rosehips. Somewhat withdrawn, even after some hours in the decanter. A fine warmth underneath though. Needs time.
The taste is restrained and taut with notes of hard cherry candy, rosehips, road dust and dry tobacco. A long, dry finish with noticable, well polished tannins. Will need 8+ years.
89p   (tasted 2017/06)