"A little beauty, I love you madly,
Come on home with me,
I know you´re hot, I know what you´ve got,
You know I want to shake your tree

I don´t know if Lemmy was thinking of the latest vintage from Bordeaux when he wrote this song, but I got to think about it when I read Parkers report on the 2009 Bordeaux vintage from bottle.

"unquestionably the greatest Bordeaux vintage I have ever tasted" - 16 100 point wines - "may well go down....as the single greatest vintage ever produced in Bordeaux since records have been kept"...

But intrigued I get, so I head down to the state monopoly, for being such a big vendor of wines, surely the shelfs would be full of released 2009´s. If not the big guns, but a selection of the the ones that Parker mentions - "hundreds of wines that cost well under 25$ and represent some of the finest quality money can buy for wine consumers".

2009 Château Les Roches Gaby
They don´t seem to have a website, but the Swedish importer informs that it has been in the same family for 250 years, and that after 1999 big investments have been made. The cepage is 85% Merlot, 10% Cabernet Sauvignon and 5% Cabernet Franc. It has been kept on french barriques, of which 45% have been new.
The nose opens up with sweet red and black cherries, rosehips, dry earth and rather a lot of sawdust - it smells just like freshly saw timber. That cools down with some air, but it is in the background the whole evening. Maybe a tad too much new wood here.
The taste is better, fresher and sweeter with lots of nice cherry and currant fruit with some dark chocolate and new leather that adds to the profile. A medium long, fresh finish that cleans up the mouth nicely. But there is a touch of warmth there, right at the back, that don´t really sit well with the rest. A nice enough wine, but I won´t be buying more of it.
82p   (tasted 2012/03) 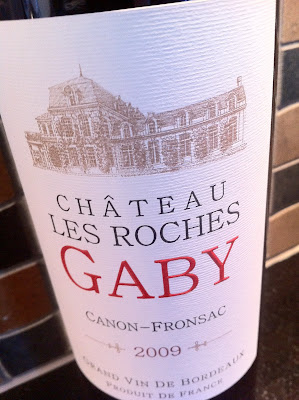