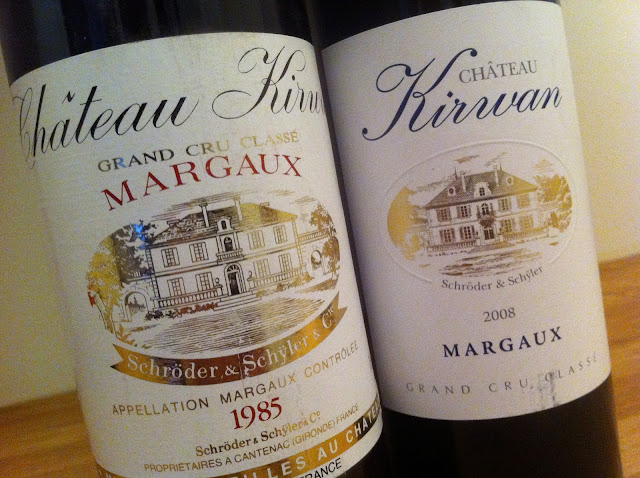 Had an old, forgotten bottle of 1985 Kirwan in the cellar and I saw that the state monopoly had the 2008 - why not pair them together? I can´t say that I have been a fan of Kirwan, I think they perfomed rather uneven and not up to their classification during the 80´s and the beginning of the 90´s, but supposedly there has been improvement made since.. Lets find out!
Just popped and poured.

1985 Château Kirwan
A mature, medium deep, autumly nose with notes of tobacco, red currants, dry leather and some road dust. Fully mature on the nose. With air coffe aromas and that nice scent of rotting vegetables appear. Really nice.
The taste is cool, mature and a little on the lean side, but the fruit is nice with notes of red currants, lingonberries and dry rasberries. Earthy notes mixed with cold coffe and tobacco is present in the finish. A medium long finish. Not a memorable wine as such, but when you are in the mood for a nice, mature Bordeaux, this fills the bill.
85p   (tasted 2012/03)

2008 Château Kirwan
A big, sweet, "modern" nose with notes of black currants, blueberries, dark chocolate and lots of vanilla infused cookie dough. A touch of bakelite. There is nothing wrong with it, it has very modern, sweet opulent fruit, but where is the character? Just on the nose, this could be a Cabernet from anywhere in the world.
The taste is is the same - young, strapping, sweet and powerful - but again, where is the terroir, the origin? Blueberries, black currants, rasberries, dark chocolate, vanilla oak and new leather. The finish is long and warm. Om its own, a good wine. As an example of a young Bordeaux? Not for me. I tasted the 85 Kirwan the first time in 1992, when it was 7 years old. Reading my note from then, it was clearly a young Bordeaux with typicity. Am I just getting old and grumpy...?
85p   (tasted 2012/03) 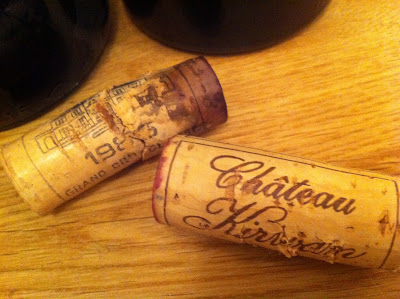