This interesting piece of art (hopefully...) arrived yesterday - the debut vintage of Vigorello. By now Vigorello consists of 60% Sangiovese and 40% Cabernet Sauvignon, but back in 1968 it was all Sangiovese. Starting in 1979 Cabernet was added, the first year with 10%. It gradually increased and from 1997 it was 40%, the percentage that it has held since then.
The name comes from the latin vigor, that means strenght, energy, character. Now I just have to get some more vintages... 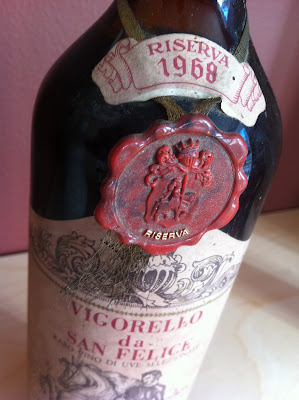