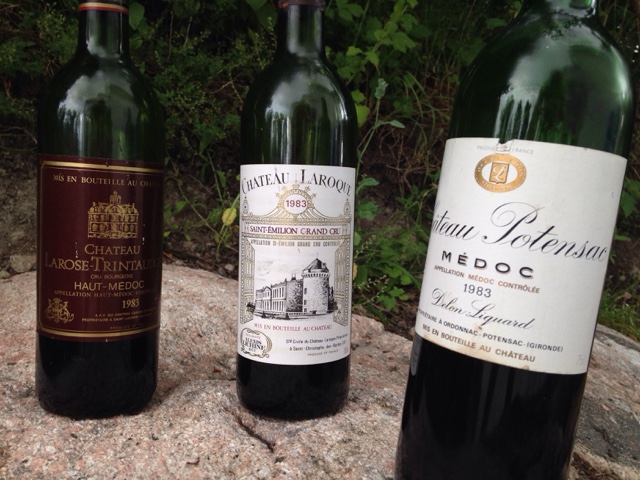 Working from home on one of the last days before the much needed vacation, I had some meat and potatoes left over from the weekend, why not make a easy going casserole with some mushrooms, onion and a healthy dose of cream, for lunch?
And what to drink? Why not open three bottles of Bordeaux? The afternoon of work did go smoothly, and note, I spat the whole time...
Popped and poured.

1983 Château Larose-Trintaudon
The one I had least hope for and it turned out the best one, there is wine for you. Although Peppercorn noted in his Bordeaux book (1991) that he had tasted "an exceptionally good 1983 with really opulent fruit and tannins". And that opulence was still showing. This is the largest wine property in Bordeaux with 190 ha. Back in 1983 the wine consisted of 60% Cabernet Sauvignon, 20% Caberbet Franc and 20% Merlot.
The nose is mature and barnyardy with fine notes of red and black currants, old leather, tobacco and burning autumn leaves in a distance. Held its own for all of the afternoon. Very good and very old school. Lovely.
The taste is mature, round and medium bodied with notes of cranberries, earth, tobacco and graphite. The finish is long, warm and velvety. Really good. It keeps evolving in the glass for 3 hours. Fully mature but no hurry to drink. The ideal luncheon Claret.
90p   (tasted 2016/06)

1983 Château Laroque
A large property in St Emilion with its 61 ha, it still is only one third of Larose-Trintaudon. In 1983 it was a blend of 60% Merlot, 20% Cabernet Franc and 20% Cabernet Sauvignon.
The nose is open, mature and lovely with notes of ripe plums, moist forest floor, liquorice and there is some strawberries popping out now and then. A very fine sweetness to the fruit. Very, very good.
The taste is tighter and drier, with notes of dried plums, spices, old leather and cigarette ashes. The initial taste is fine and round but it turns dry in the middle taste and the finish is just dry. Would have been lovely 10 years ago. It worked fine with the food though.
85p   (tasted 2016/06)

1983 Château Potensac
On paper, the best of the three, but again, the bottle in question is proof of the pudding. The 83 consist of 55% Cabernet Sauvignon, 25% Merlot and 20% Cabernet Franc.
The nose is mature and a bit withdrawn with notes of black currant leaves, graphite, tobacco flakes and coffee grounds. A metallic touch to the nose. Deep though, even if it comes out a bit angular.
The taste is stern and mature with notes of ripe black currants, cherries, tobacco and hot earth. A bit austere. Long though. Peppercorn describes Potensac as "often rather angular in structure" - and for this 83 I can only concur. Nice stuffing though.
85p   (tasted 2016/06) 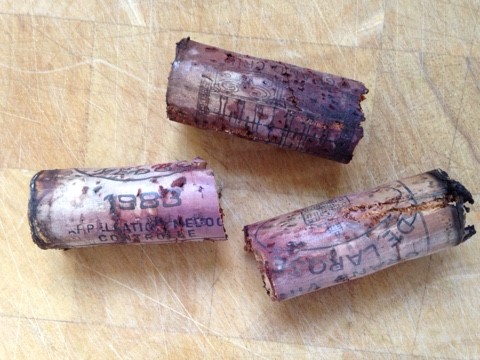