Vinunic invited, Frederik Willbrenninck told us about the history of the estate and the current state of affairs and yours truly enjoyed the wines! 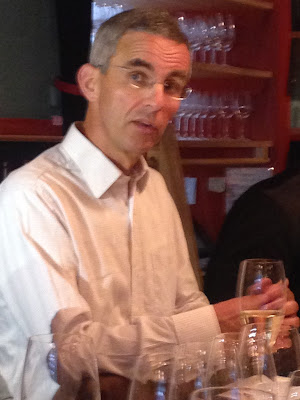 1999 Moulin Touchais
A cool, fine nose with notes of pine apple juice, some rubber, honey and some botrytis. A bit on the light side but very nice.
The taste feels fatter and broader than the nose with notes of ripe pine apples, peach, lanolin and moist earth. Good but lacks a bit of depth.
85p   (tasted 2015/09) 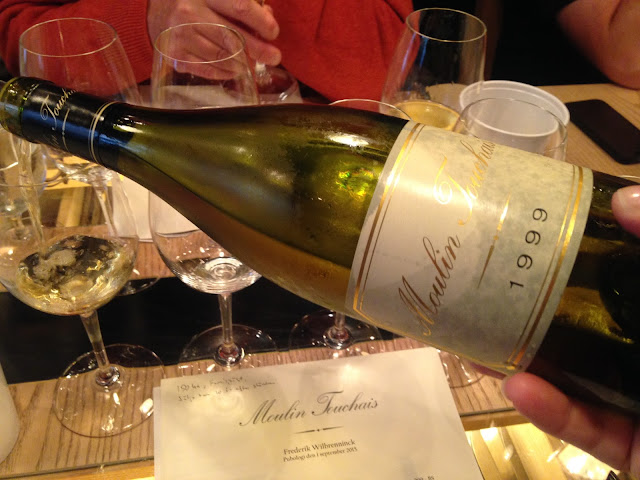 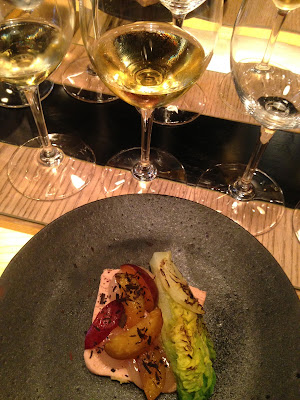 1997 Moulin Touchais
The 07 is a winner. The nose is deep and refined with notes of peach, smoke, detergent and sweet flowers. Very, very good. A bit restrained. This is going to age well.
The taste is concentrated, long and intense with a wonderful sweetness balanced with a fine acidity. Notes of ripe peaches, apricots, soap and flowers. Complex and fine. Has a long life ahead of it.
93p   (tasted 2015/09)

1983 Moulin Touchais
This has an overripe, somewhat oxidized nose with notes of (over)ripe yellow plums, matchbox, moist earth and a hint of an old cellar. Not bad but there is no nerve here.
The taste is big, semi sweet and foursquare with notes of dried plums, forest floor, paint and dried flowers. The finish is medium long and ends semi dry.
Frederik told us that way back the estate decided not to release the 1983 as a Moulin Touchais, but some was released as a Anjou Blanc in Sweden. Seems like I have one left, gonna try it soon. But after many years in their cellar they tasted the 1983 again and now deemed it good enough to release as Moulin Touchais. Based on this sample, I´m not sure it was the best decision.
79p   (tasted 2015/09) 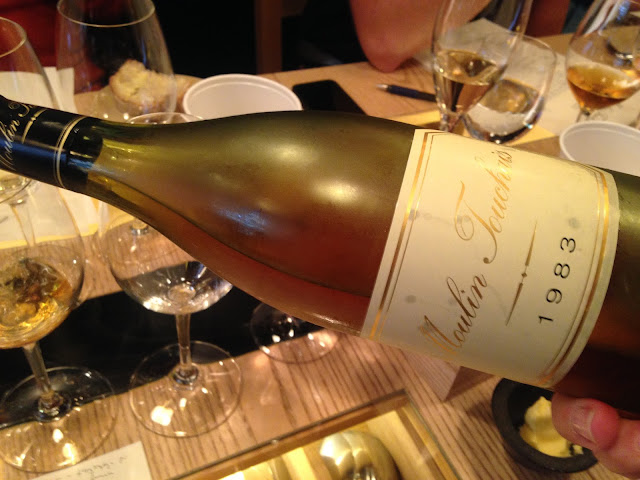 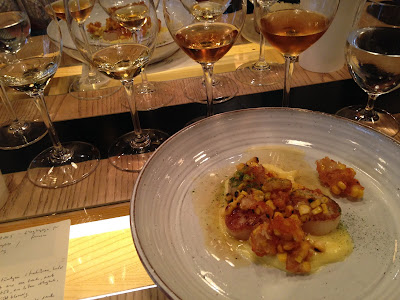 1981 Moulin Touchais
The 81 is fresher and feels younger than the 83. The nose is a little low keyed but shows nice scents of plums, flowers, moist earth and tangerines. Very fresh.
The taste is bigger than the nose leads you to believe with fine notes of dried apricots, crumbled vanilla cookies, dried flowers and caramel. A medium long finis that ends medium dry. Very, very good.
89p   (tasted 2015/09)

1985 Moulin Touchais
This is a perennial favourite of mine. After the tasting in 1992 (see below) I went out and bought a case, and still have 5 bottles left. When I tasted it in 1992 with the 1885 beside I wrote - "this will rival the 1885 in due course". But sadly I won´t be around to see if that prediction will be fulfilled.
The nose is just wonderful with its concentration, focus and lightness. Lovely notes of yellow plums, wet asphalt, flowers, oilcloth and dry vanilla ice cream oozes up from the glass.
The taste is beautifully clean and radiant with notes of ripe yellow apples, resin, flowers and oilcloth. The finish goes on for a minute. This has the stuffing to outlive me by many years. Buy some, you won´t regret it.
94p   (tasted 2015/09)

1975 Moulin Touchais
The ten year older version has an interesting nose with notes of sweet/sour lemons, rubber, cigarette smoke, dry vanilla, caramel and earth. There are lots going on here, and it is good!
The taste is tight and on its way to maturity with notes of dried plums, apricots, earth and dry caramel. A high, fine acidity. Very long and ends semi dry. Very, very fine.
92p   (tasted 2015/09)

2001 Moulin Touchais
This youngster sports a deep, concentrated nose with notes of quince, tangerines, plums, oilcloth and summer flowers. A very young, upfront nose with lots of character. A fine nerve to it. Very fine.
The taste is refined and pure with notes of plums, oilcloth, flowers, ski wax and a touch of smoke. A creamy finish with some botrytis. Long and fine. This has a splendid future ahead of itself.
92p   (tasted 2015/09) 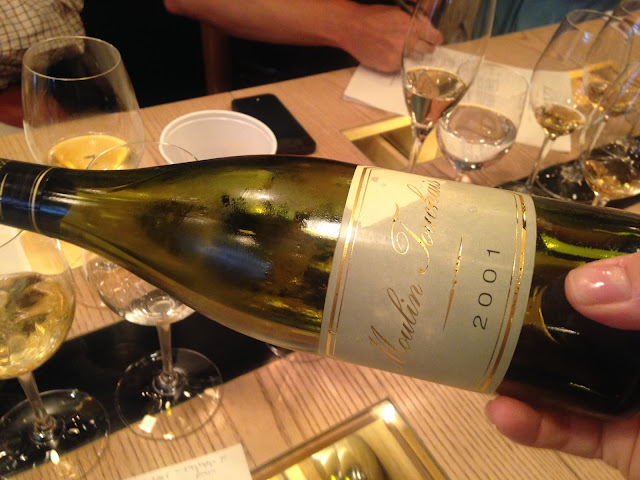 2000 Moulin Touchais
A young, tight, semi dry nose with notes of lemon cream, apricots, band aid and some green scents. Not much sweetness and no botrytis. Good though.
The taste is medium bodied and semi dry with notes of lemon peel, yellow plums, moist earth and oilcloth. Some warm grass. The acidity is high and there is not enough sweetness to balance it. Wait and see.
82p   (tasted 2015/09)

NV Moulin Touchais Century Reserve
Now for something completely different. In a rare sense. It is Moulin Touchais alright. "A illegal one" as Frederic said. In the 50´s when recorking all 19th century bottles they found a bunch of bottles with low fills. They blended all of them in barrels and in 1955 they rebottled the blended wine in the original bottles. The average vintage of the blend is 1875...
The nose is a bit low keyed yet intense, with notes of dry peach, detergent, burnt caramel, cigarette smoke in a distance and forest floor. A fine depth and multi-layered in a way only really old, great wines can achieve.
The taste is fine and elegant with a touch of sweetness and notes of dried apricots, detergent, blood orange peel, old red apples and moist earth. A very long, dry, intense finish. Really fine and a testament to the longevity of Moulin Touchais.
92p   (tasted 2015/09) 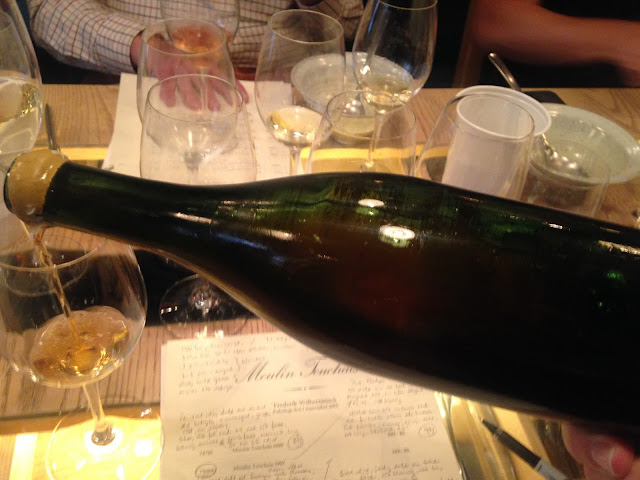 I have attended two major tastings of Moulin Touchais over the years, apart from the odd bottle here and there.
The first one was in September 1992 and interesting enough that one was hosted by Alex Willbrenninck, Frederiks father! The following vintages was poured:

Ten years later, in September (this month seems to be the Moulin Touchais month!) 2002 I arranged a tasting with the following vintages: